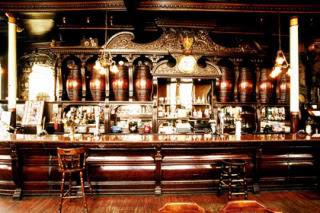 Glasgow only has a handful of historically significant bar interiors left (including The Horseshoe, The Steps, The Railway Tavern, The Portland Arms and The Laurieston) so it’s positive news that one of those, the Old Toll Bar, is to re-open on Saturday (1st October).

Languishing empty for at least a couple of years, the Old Toll has been comprehensively refurbished by Old Toll Inns Ltd, who have ambitious plans for the joint.
The Old Toll started trading in 1893 (not 1874, as stated on the wall outside) and is probably Scotland’s best example of a trend described as the “palace pubs”, not to be confused with the “gin palaces” of earlier in the 19th century.

This style of pub aimed to draw people away from the confines of their one-roomed dwellings into grand, impressively designed places of entertainment and booze. Ornaments and fittings of not only great value, but dazzling to the late Victorian/early Edwardian eye were the means by which the owners of these venues attracted large numbers of punters.

In the case of the Old Toll, etched and painted glass, beautiful advertising mirrors and improbably smooth dark wood are the significant features that will have entranced drinkers over its long lifetime.

But all of these are surpassed by the bar’s gantry – eight original spirit casks sit high and proud, above recessed sections rendered grotto-like by clever use of light and shade. At the very top, the wood is carved like a ship’s prow and in the centre of this magnificence the Old Toll clock ticks, bearing the bar’s date of birth. 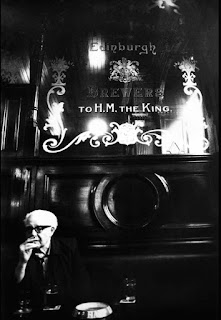 The new owners are sweeping away the extraneous modern clutter of TVs and fruit machines that obscured the grandeur of the interior. On my last visit to the Old Toll, about five years ago, these new additions were an annoyance, as was the totally abandoned nature of the downstairs lounge and the lacklustre bar service.

Not that it is easy running a traditional pub in a relatively obscure part of the city, where footfall will never be that of the city centre, this in contrast to earlier times when the pub – as suggested by its name – sat at a toll point of a major turnpike west out of the city.
But the bar doesn’t sit in complete isolation today, there are four or five bars nearby, most notably the Viceroy – itself a little gem of a traditional pub, with Knox brothers’ stained glass from the late-Victorian era and a terrazzo spittoon.

The other bars in the area show that Rangers’ influence is strong around here, with the triangulation of The Angel, The Quayside and The Union Bar dominating. And unsurprisingly, this association is a long one. One of the Gers’ most famous players, Jim Baxter, was the landlord of a previous incarnation of The Union Bar, and his son, Stephen, was at one time the landlord of The Old Toll Bar itself. As an aside, in my pre-BB days I had a run-in with the latter when he was throwing his not inconsiderable size about. But I’ll leave that story for another time.

I’m still negotiating with the Muse over my attendance at the Old Toll’s re-opening on Saturday and hoping to be the first inside its walls, but whether I make it or not, it will be fascinating to see if the new owners are successful in their project promising craft beer from small producers like Up Front Brewing and Fallen Brewing; classic cocktails with a modern twist; and old board games and gramophones. If things go well, this chapter in the life of the Old Toll could well be entitled – the past re-energised.
Posted by The Pledge at 11:55