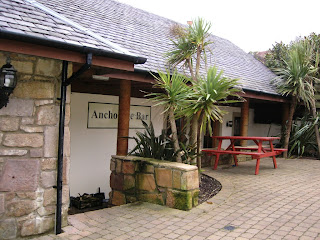 This is Bruce country. The ruins of Turnberry Castle are just down the road, Robert the Bruce’s probable birthplace. Dunure Castle, another ruin, sitting high on a small headland has indefinite origins but may have been used in the early 14th century as one of the lookouts for the rumoured return of the future king from his forced exile in Kintyre and the far north of Ireland.

I’m no Royalist or believer in feudal hierarchies – quite the opposite – but having recently read a couple of books on Robert the 1st and his military captains, their sacrifices, privations and resolution through almost 25 years of struggles for independence, do put Wee Eck, Nicola et al in the shadow, especially with the Referendum compromises now being placed on the table.

On the way further down the coast, to Galloway, for other incognito business even more prosaic than bar reviewing, I had taken the chance to finally visit the Dunure Inn, some 4 or 5 years since I’d heard of its existence.

I had thought the inn was situated high up on the road near the castle and the adjacent public ground, which incidentally would make a good picnic spot if conditions were untypical for wild Ayrshire.

But turning off the main road the signposted route to the inn dropped steeply to the wee harbour, and there it was, sitting right on the quayside beside the aptly named Harbour View Coffee Shop.

The parking area is quite tight, so making sure I didn’t end up in the drink, I carefully positioned the vehicle before deciding to recce round the back of the premises first. This is usual for me, wanting the whole picture, and the rear of a pub – as with many other things – often tells you more than the front. 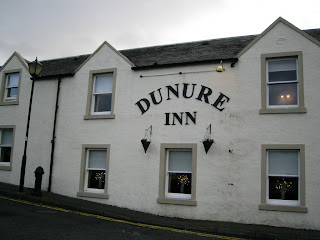 It isn’t a straightforward layout, you can’t tell the outhouses from the actual inn and after trying a few locked doors – and taking a photo of some palm trees - I came upon French doors that looked promising. This was the courtyard, I learned later. No chairs out there this time of year. But even this entrance held no joy until a figure opened the door from inside.

He was the resident drunk, I think. The clue being the way, after a greeting, he returned swiftly to his stool at the bar, looking as relaxed as he would at his own hearth. Unfair of me, perhaps, but when a barperson eventually arrived he ordered a half and a half as quick as you like, and was halfway through that half and half before I was halfway through placing my modest order.

I wasn’t having lunch so had spent those ten minutes before the barperson appeared not perusing one of the menus but looking round the interior. Plus ca change. This the main bar/lounge area, looked like it had been furnished and decorated around half a decade ago. Low leather couches and some pouffes scattered round and mini tables built round and into pillars and walls provide the seating, and prints of paddle steamers and the castle from local artists such as John Damari and William Morgan-Kerr provide some colour and context. All fairly comfortable and of the mainstream trend but lacking – the prints aside – any representation of place, and more of a coffee arena than of alcohol.

A large, extended family group then entered, apparently from Glasgow. I watched as they began to study the menus, and soon they embarrassed me, a fellow of the same city, with their ignorance of food and refusal to try anything new. The adults were as bad as the kids. Forgive my food snobbery, but I almost tried to disguise my own accent when saying my goodbye to the barperson.

Eventually, I think they decided to go down the interior steps to the Anchorage Restaurant, which is at the front of the building. A little aside here: why name the restaurant within an inn/hotel? Why not just leave it as The Restaurant within the establishment? This name within a name just confuses, especially people like me. 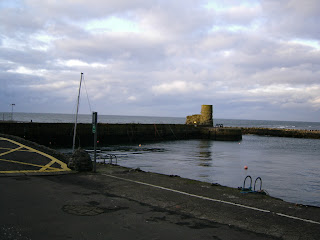 While they were humming and hawing I moved on to the smaller bar along a narrow corridor. This would have been accessed via one of the doors I’d unsuccessfully tried earlier. It is more of a standing kind of area, barrels for tables and no couches. Sport will be watched in here, but pleasingly, the TVs are medium-sized and unobtrusive. The drinks range is ordinary, Guinness, 1664, Tennents Lager, Belhaven Best the draught, the latter two coming in at a reasonable £2.80.

I continued round towards the front of the inn, where the Anchorage is accessed down another set of steps. On this lower split-level, the restaurant has a darker, slightly more sophisticated appearance. The main menu is supplemented by seafood specials, a must for this kind of location.

Upstairs there are 14 rooms, of perfectly reasonable accommodation. No luxury, but with a front-facing room, the wee harbour and rocky coast will provide hours of contemplation.

Before I drove off I sat at the handy picnic tables overlooking the water, exchanging for may have passed as pleasantries to a large, bearded bloke just emerged from the café. This harbour was built in 1927 but my thoughts were occupied by far earlier times.

This stretch of Carrick coast was where Robert the Bruce landed in 1307 as he began the fightback from his early defeats. A resurgence that eventually brought he and confederates like James Douglas the prize of full Scottish independence. I wonder what they would have thought of Devo Max?
Posted by The Pledge at 21:13 2 comments