The Old College Bar - Glasgow's Oldest Bar to be Demolished 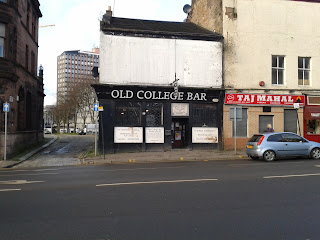 I mentioned The Old College Bar in a recent blog. That post was about new hopes and beginnings – ironic, then, that I included Glasgow’s oldest bar.

The reason for its mention is its impending destruction. A proposal for its demolition has been submitted to the council and it seems that it will be granted. Very little opposition seems to be forthcoming to Bishop Loch Homes plans for, presumably, shiny homes and offices, that include the knocking down of the bar.

This lack of support for a unique historical item is strange but less so when you examine the Glasgow scene. The two other bars laying claim to be the city’s oldest – The Scotia and Sloans – have plenty of noisy supporters and an online presence and many of those people haven’t even heard of the Old College Bar.

But it wins this three pub race for posterity when you apply the rules of the race. For a bar to be the oldest it merely has to have traded as a bar in the same name, in the same building and with a continuous licence from its birth until today. The Old College has been around – without a break – since 1812. The Scotia dates from 1815 at the earliest and Sloans from 1797 – but that only as a restaurant, its bar days only began long after. And Sloans has a sizeable gap when the whole place was shut.

However, despite the Old College’s legitimacy and unsurpassed longevity its voice and its cause is quiet largely because it is not – like The Scotia - frequented by artists, writers, folk singers and a myriad of hangers-on. Neither does it have the central location of Sloans.

No, it sits on the edge of east end oblivion from the perspective of most influence-makers and its regulars are just ordinary guys out for a cheap-ish pint. And the lack of craft beers or expensive brands means there’s no support from our CAMRA comrades either, many of whose members would rather support Wetherspoons than historically important free houses. 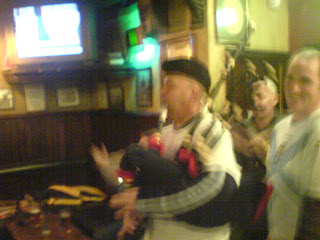 I’ve been in the Old College only around ten times and its interior is unremarkable but I’ve felt privileged every time. It is one of the handful of Glasgow bars in which you can readily feel you are standing where your ancestors have stood, sharing an experience down the decades, even the centuries.

In 2007, after the sweet agony of yet another Scottish footballing near miss – defeat to Italy in Euro 2008 qualifying – the bar was packed with revellers despite the result, when a lone piper entered unannounced and proceeded to play a celebration/lament. The performance was about the day – not the result – in which the whole city had been out and about, filling every corner of every establishment where the game was showing.

And the theme of celebration in adversity was very Glasgow and very this kind of pub. And places like The Old College retain that in their bricks and stone and timber. 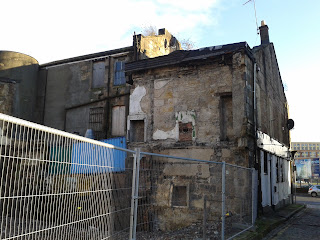 Admittedly, that structure is crumbling as this photo from a recent visit shows. It’s a product of owner neglect over many years but this neglect could and should have been prevented by the council. They have the power to do so, but like many earlier administrations their attitude towards built heritage is itself neglectful and unenlightened. There is far more municipal appetite for business developments such as that in the large site bounded by High, Duke, Ingram and Albion streets and the demolition of the bar compliments this venture.

The University of Strathclyde is one of the development partners and I’m sure they and GCC will point to the economic benefits but it will be interesting to see just how many local jobs are created and how much money will be circulated through Glasgow’s economy as a result.

Some sources say that the Old College Bar’s building dates from 1510. True or not, it has seen Glasgow’s fortunes rise and fall many times. As the city’s only double-centurion it has survived the decimation of various City Improvement Trusts and the cultural vandalism of post-war planning, to name but a few civic attacks on Glasgow’s heritage.

And it sits on one of Glasgow’s ancient thoroughfares that - apart from what remains of the Tolbooth, the cathedral and Provand’s Lordship - has virtually nothing of any real age left. When you consider the equivalent street in Edinburgh – The Royal Mile – and its preservation the comparison does not flatter the larger city.

The demolition of The Old College Bar will cut a rare link with our civic and cultural past. More than that it would sever another fragile connection we all have with our forefathers; drinkers and non-drinkers alike.