A Gorbals' Story - The Brazen Head and Sharkeys 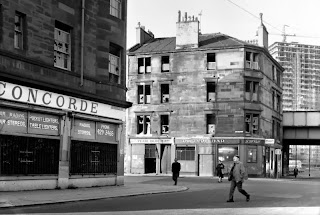 The Gorbals used to be home to scores of pubs to cater for the hundreds of thousands that lived there. Now, only two remain in Gorbals proper. The Brazen Head and Sharkey’s both live under railway arches but offer very different experiences.

For Glasgow, the Gorbals serve as a shorthand. They represent the past in all its glory and dirt. Old Glasgow of overcrowded tenements, teeming streets and cutthroat gang warfare. No Mean City, in deed, going well beyond the pages of that famous book.

But there was another story of The Gorbals, of hope triumphing over deprivation in an area with probably more of a mix of cultures than anywhere else in Scotland. Immigrants from Ireland, Eastern Europe and the Sub Continent as well as the Highlands and other parts of Scotland all came together to often defy the cramped, insanitary conditions to build a community.

Post WW2, the unassailable city elders did what they did to many other parts of the city, they rendered destruction and called it progress. Extensive improvements and the clearing of the worst tenements were required but what was given, other than being an academic experiment in planning, was a void.

So, now with 99.9% of the residents from the 1940s either dead or displaced far and wide along with their descendants, the Gorbals now only has a relatively small amount of modern flats and half-demolished high rises. On the whole, better housing, but little else. No real places for people to socialise within their own district.

Which brings me to the two remaining pubs. Yesteryears' temperance campaigners condemned bars as do their puritanical counterparts in the political and medical professions today but even they should not deny that pubs do provide a place for people to MEET. Without such venues you don’t have a community. 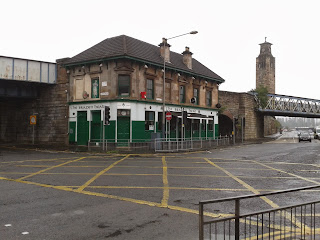 Anyway, concentrating on what remains: The Brazen Head is famous beyond our small town. Some time in the late 90’s, when I drove a private hire for a living, I took two Danish football fans from their hotel in Garnethill to the BH, on their instruction. They knew all about it.

With the demise of Baird’s Bar the Brazen Head may now be the pre-eminent Celtic bar. There’s no mistaking its allegiance as you approach by taxi or by foot, the vivid green beneath the arch of the defunct Barrhead railway line. The building for the Gorbals railway station was here and the railway owned the attendant pub to get their hands on the inevitable profits.

Everything is quieter here now allowing the pub to dominate this road junction. It has never been shy about advertising itself or its beliefs, most notably the huge poster of Paolo Di Canio that was draped over the building when he was Parkhead’s idol. The memory may be embarrassing now with the man’s fascist sympathies laid bare and contrasting blatantly with Celtic’s supposed left leanings.


Politics don’t have to be discussed though, inside, the many screens mean you don’t have to discuss much, just gaze and comment, occasionally, on the action. But amazingly, there are even more football shirts and flags than screens on the walls.

Despite this there is stone visible, letting you know exactly where you are – under a railway arch. You may not feel there is a need to be reminded after only a couple of pints but nearly all the best bars are strongly founded in their surroundings, they are part of the place even when that ‘place’ has changed dramatically. You would expect no less of premises that have sited a pub from around 1851, the most famous incarnation being The Granite City.

For the first-timer the interior is surprising large, boot-shaped with a three-sided bar. Little wooden semi-booths line the south wall and a permanent stage on the opposite side towards the back. Another surprise is even further back, out the back door, in fact - a covered smoking area to rival most in town.

Visit here match day and it will be predictably mobbed but during the week, too, it continues to host a fair amount of punters meaning the large space rarely feels underused. Its future fortunes look fairly good and decidedly better than the Gorbals in general. 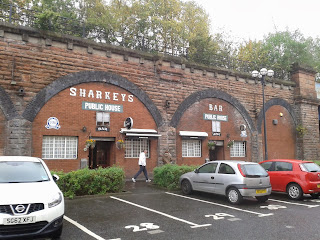 Around a half mile closer to the city centre is Sharkeys, also sat under an old railway arch. It’s been there around 20-25 years. Set beside small industrial units, a quiet Holiday Inn and more bland new flats things are peaceful if not dull around here.

But, I have to suppose that is an improvement upon events in nearby Hospital Street in 1979 when a bar of the time, Clellands, bombed. No, I don’t mean it failed to live up to critical expectations; it was actually subjected to an attack by explosives. Ah, the good old days, when people made it clear when they didn’t like you.

Inside this joint you could be anywhere. No windows and a strange retro décor that although is Artexed to death seems to belong to no particular decade. The tables and chairs, though, are easily definable – 1980’s Bullseye. And they’re complimented by the cute brickwork under the bar counter.

Long and thin and split in two, only one half in use during the day and with small windows and a low, false ceiling it could feel oppressive, detached from what’s happening but for some pub-goers that’s no bad thing.

And it seems you can eat all day in here while you maintain your separation from the rest of the world – the hatch at the far end serves very basic food – and its presence pushes the atmosphere here well towards that of the canteen.

But the punters always seem to enjoy the fare and that’s the thing – despite all I’ve said, everyone in here seems to like the place and wouldn’t need much prompting to stay all day and night. Something is being done right.

Where are these people from? Are they local? Are they folk from the old Gorbals who pop back when they can? One group who are identifiable are those with the sailor uniforms. The nearby Nautical College is the reason. And talking about neighbouring institutions, an actor friend of mine once informed me that many of those working in the Citizens Theatre frequent Sharkey’s. But I’m unconvinced, I’ve not yet seen any loveys in here, I reckon they float back towards their fancy pads in the West End or the Merchant City before they imbibe.

The continued existence of Sharkey’s, The Brazen Head and, hopefully, other bars of the future won’t be down to a theatre’s staff or any other group of people who haven’t particularly chosen to be in the Gorbals, life and resurgence will only come from within.