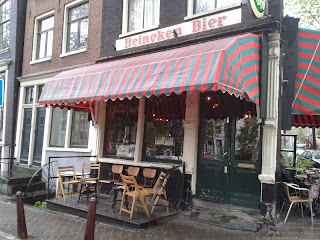 Amsterdam offers hedonists a place where they can indulge in safety, relatively free of state intervention. Even the humble alcohol user can have extra fun here. The Dutch are very proud of their traditional pubs, the legendary brown cafes, and once you’ve visited you’ll see why.

Northern Europe, not the Med, offers the closest thing to British drinking habits you’ll find anywhere. Maybe the Costas’ pubs provide an even more home-from-home experience but those are expat bars so can’t count.

Amongst those countries - Germany, Scandinavia, Poland, even Belgium – Holland is the neatest fit. They even go big on darts, for fuck’s sake. So, for an urban pub-goer seeking a holiday where bars are not only at the centre of the fun but in which the culture is understandable straight from one’s arrival in the city, Amsterdam is as good a destination as any. And it has a distinct advantage over the UK in the way it describes its pubs as I will explain later.

I’ve now been four times, thrice BBB. Eventful trips involving a mugging, hallucinations, disorientation and a near drowning. This time was a safer experience but not without its pleasures.

Concentrating on the Nieuwmarkt, Red Light/Medieval Centre and Jordaan areas one finds a density of drinking venues unparalleled in a working city of this size. Everything is crammed in but in some style. The historic economic necessity of remaining compact creating beauty and practicality today. The countless canals just further reduce the space. 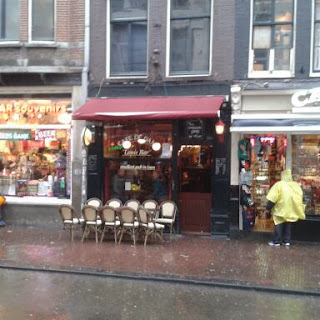 Amsterdam isn’t afraid of its past and its bars show this. The Golden Age of the 16th century during which those canals were constructed is celebrated in pictorial form in many pubs including our first stop Café de Dam – an ordinary wee place near Dam square. A tableau depicting Amsterdam as a hub of sea-borne trade, with countless sails billowing at every corner of the city.

A very typical pub this with a small, dark wooden interior. Every feature narrow from the frontage to the incredibly steep stairs up to the toilet. I met a Dutchman struggling upwards as I was about to descend. “Great stuff!” he exclaimed and I wondered how long he had held that phrase before using it.

This, the oldest part of the city is chocked with such little pubs. All worthy of a wee drop in. Less so are the ones that are so anglified you would think your North Sea ferry went right at Dogger Bank. We experienced a couple, by mistake, Café Trinity and the Old Sailor Bar. Just as swervable are the Irish pubs that appear here as they do in every city centre across the globe. Don’t go in. Do something different.

That ‘different’ could well involve any number of other drugs – look at the picture below taken on a typical street around here – how many available and legal substances can you spot? Alcohol, maruijana, caffeine, red meat at least. The other stimulant/narcotic – if I can call flesh and blood this - you would expect is just around the corner, exhibited in red backlit rooms. And the endorphins from exertion may also be nearby if there’s a back street-gym just out of sight. 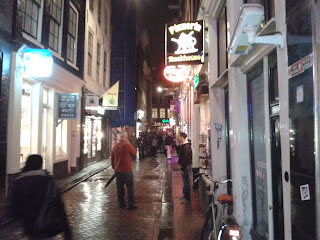 Or, for a more relaxing time you can chill in a variety of student hang-outs such as the split-level Buster’s Café which is more of a seminar venue than a binge joint.

If the Medieval district is indeed the heart of the city, two adjacent ventricles offer slightly different nighttime delights. Nieuwmarkt, to the east, has more space and a number of more sophisticated bars both in the square itself and in the streets branching off.

Café Fonteyn was one of my picks and has a less frenetic feel that the bars of the Red Light District. A place for sipping and conversing about art and design or French movies. Quite agreeable, up to a point. For even more elegance and a little more party we then moved to Café Cuba for mojitos and longed for sunshine to enjoy Niewumarkt square, if not the Caribbean.

Moving further away from the market square this district holds many side -treet bars and local corner cafes – places such as Café Captein by Binnekant Canal which can feature a sing-song and associated revelry just as likely as a quiet brandy contemplating the canal-side evening.

Our house boat – I recommend this way of living to everyone – floated on that very canal, to the east of the medieval centre. To the west is Jordaan, a once working class area that retains its reputation for having the best selection of pubs per capita.

Authenticity is supposed to be the worthwhile characteristic of these Jordaan joints. For this is the land of the brown café. Aged places that wear their longevity with pride, up to and including the brown tobacco staining on the walls - from decades, if not centuries, of use. Thus the colour(ful) name.

And thus, as I mentioned right at the start, the Dutch have a name for traditional watering holes that, as a branding exercise would give modern marketers wet dreams. Brown café evokes cosiness and conviviality in joints with tangible histories. The more you have the more you feel it. Over here we call them old men’s bars or traditional bars and so we sell them short. 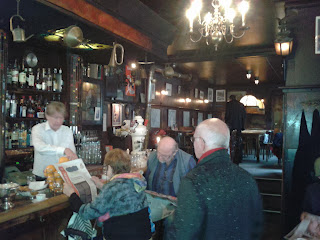 Anyway, Jordaan is famous for its brown cafes most of which sit on the corners of streets and pull in all ages. Café Eland, on Prinsengracht, is a typical example. Compact and dark. Furniture and fittings as old as the building. Worn in, you could say. And all the better for it. Places to sit all day. Read the papers. Down a beer. Sip a coffee. Chat a bit. Have another drink. Repeat as often as you want.

The nearby Café de Pels and the much- lauded Café ‘t Smalle offer their variation on a theme – take your pick or just do as many as you can. At some point you’ll experience what the locals call gezelligheid. A warm sensation of well being and brotherhood that only bars/cafes can give. Having a few jenevers to chase down the beers helps.

Other attractions around this general part of town could include a coffee and brandy at Luxembourg (defined as a Grand Café) in Spui, a rival in elegance to the coffee houses of Vienna. And a Texels bock in one of the oldest restaurants, the raftered Haesje Claes. This was described in some guidebooks as being “touristy”. I don’t agree. “Touristy” is the myriad of generic steakhouses on or around Damrak.

This trip wasn’t without its disappointments though. It rained almost throughout. Our Sunday evening visit to Der Sluyswacht, the most famous Nieuwmarkt pub found this tiny former canal keeper’s house shut for the night. One of the most highly regarded brown cafes – De Pieper was also shuttered after I’d walked for over 20 minutes in the rain to find it.

Some places failed to live up to their promise. One such being Café Het Schuim on Spuistraat. Billed as a quirky extrovert of a place it only reminded me of uninspiring venues on or near our own King Street. And nostalgia for previous trips led to a wasted traipse to Rembrandtplein which on this wet, windswept night was virtually closed. Taking refuge in La Bastille bar nearby we swiftly realised this was a tourist trap of the worst sort – boring, that is. 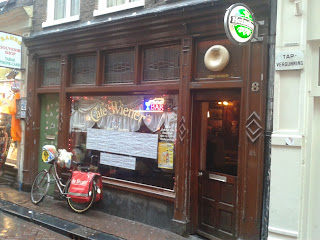 But these setbacks are at the back of my mind, left far behind. What I remember far more clearly is a little bar on Lange Niezel – Café Weiner. I walked into it at random on our first afternoon. Another cosy little place with football scarves covering every inch of the ceiling and a mostly middle-aged bunch of regulars. I noticed those elements after first being struck by an amazing sight – ashtrays! Indoors!

I looked around at the other punters. No knowing smiles or winks. Looking back at the black, shiny ashtray sitting there on the counter I wondered if this was a trick. Either of my eyes or of the police, who could be hiding in the cellar or a stock cupboard ready to pounce. But this was Holland. Land of liberty.

So, I lit up my panatella and enjoyed my first proper indoor smoke in seven years. No officer of the law appeared and no-one else paid any notice. They continued to chat and drink and some of them smoked.

On our last evening I brought the Muse with me. As I approached the bar the barman asked me if I’d just smoked a joint. I smiled but shook my head. “What do you think I am,” I asked “The Hash Hack rather than the Bar Biographer?” He looked puzzled but humour never really works directed at those using a second language. 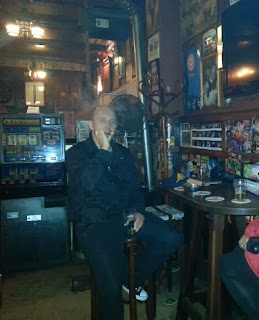 Perhaps I looked pale but it was just excitement at my imminent VegaFina robusto. And puffing on that monster I ruminated on the smoking laws here and on freedoms in general. The exact legal position on smoking in public places, I couldn’t establish, but this and other pubs response to the law encapsulates the Dutch way of life and way of thinking.

They look at a law or a moral standpoint and think about balance. The balance between the freedom of the individual and the state enforcing its will. If there is negligible or debatable harm to others caused by an action they will always err on the side of freedom. And if the ‘harm’ is confined the individual themselves they will stay well out of it.

And my advice for anyone visiting Amsterdam from these islands, is in the same vein – do something that is illegal in the UK.