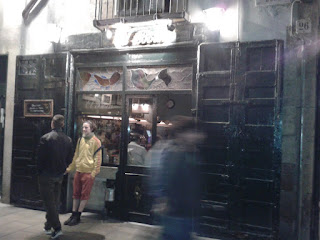 A recent holiday has only reinforced my fondness for the Catalan capital. Day or night, the natives of this famous city know how to enjoy life. And unlike some southern European cities drink and the places it is imbibed are, almost, as important as food and restaurants.

Daytime was covered in my earlier blog. This time it’s nightime and a journey from La Ribera across the Barri Gotic to a finish in El Raval.

The Muse and my brother accompanied, both patient in the face of my bar-hopping compulsion which, in this kind of environment, can get quite out of hand. But it does produce a longer list of bars visited than a ‘normal’ night would produce.

La Ribera, even less than a decade ago, used to be a quite different place. When one crossed the busy Via Laietana, the artery down which vehicles hurtle to the port, one entered a relatively impenetrable part of the city, an area even some locals looked on with disdain. It was perceived to have no tourist draws and many only passed through it to reach the Parc de la Ciutadella. 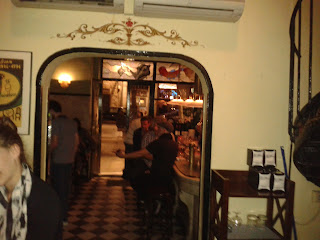 It has changed. Boutiques, galleries – including the Picasso - restaurants and bars proliferate. But not all of it has been gentrified. We began our night in the top half of the district, Sant Pere, through narrow streets of older housing and concrete newcomers, most of which accommodate poorer families and immigrants.

Carrer d’Allada Vermell is itself a rather ugly concrete street with a few trees to lighten the look, but home to a number of cafes and bars. We chose the Casa Paco, a well regarded small bar that attracts the local cognoscenti. Basic metal tables and chairs fit the environment and it was pleasant to be out in the square, sampling an experience well away from the tourist centres, with an easy breeze that would have played with my hair had I more of the stuff.

Our next stop, El Born bar, is named after the short, leafy, street that is the centre of tourist activity in La Ribera. This bar was one of the new arrivals around 20 years ago that were the vanguard of the area’s transformation.

This bar has two small rooms downstairs and a little more space above via a spiral staircase. Its cramped nature, including the cellar accessed by a trapdoor amidst the tables doesn’t get in the way of a good time. The cheerful staff help too and offer good drink advice, such as recommending their best bourbon for me. 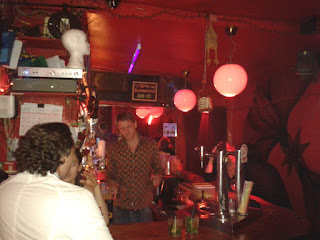 After a couple of swift ones on ice we were out and past the Santia Maria del Mar, Barcelona’s largest example of a Gothic church. The street behind, Carrer de L’Argenteria is full of good tapas bars but we eschewed their charms to press on to the aforementioned Via Laietana and across it into the Barri Gotic proper.

The promenading Carrer de Ferran was still populous as we hunted our next booze hole. We were thus distracted when a shout went up the street. Two quite well dressed guys in their early 20s sped past us a second or so after the cry. Being a Glaswegian, my initial thought was that this was a fight being escaped, but in another instant a middle-aged German came steaming past also.

He had been robbed. He wouldn’t be able to maintain that pace so we knew his valuables were gone. Even if he were to catch them, his money would probably have been passed to an associate of the thieves already. We cursed our slow reactions, wishing we had realised quicker and stuck out our legs, or employed even stronger means, to bring down the muggers. 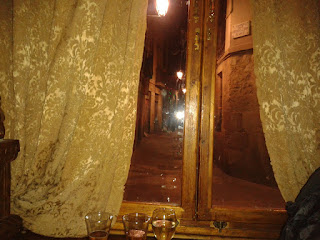 Especially so as The Muse had herself been dipped by an English woman the day before, while browsing scarf stalls at the bottom of La Ramblas. So despite my enthusiasm for all things Barcelona I won’t yet be employed by the city’s tourist board. Mugging remains a problem and economic woes may make it worse.

But onward to more positive things. Such as the delight in turning off a busy street into a narrow byway down which mystery lies. In the old town this can happen hundreds of times and it gives me, at least, a delicious frisson.

One of these lanes is the Carrer d’En Rauric and at a bend in its course there are two bars only open at night. Both easy to miss, they are that tiny. Sugar and Club Rosa are their names. I liked the spot so much we sampled both.

Both do what you good joints do in the confines of the inner city; they make lack of space not only surmountable but a charm. Curtains, red lights, candles, cheap old paintings, cushions in window alcoves all somehow work. The second of the two also manages to be something unheard of in Britain, a trendy Gothic bar.

Even the fact that Brewdog’s 5am Saint was off in the first joint, didn’t harm the good impression. Partly because Brewdog products are becoming as ubiquitous as Carling back in the UK.

Placa Reial is the main entertainment square in the Barri Gotic. I’ve enjoyed a couple of great nights in Jamboree and other clubs there but on this night we made the wrong choice and picked a corner bar, Roma Reial. Too many virtually abstemious tourists filled the outside tables and chairs and even the novelty of urinals you needed to balance on your toes to access didn’t save the place.

Bored bar service didn’t help. They’d seen it all before. Good for them. They just hastened our exit towards an area that contrasts markedly from Placa Reial. 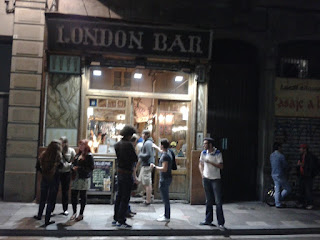 El Raval was even more notorious than La Ribera. OK, now the parts adjacent to Placa de Catalunya and the top end of Las Ramblas have been softened and plumped. Designer shops are dotted about, along with some notable restaurants and Almirall, the oldest bar in town. But pockets of the lower end, the Barri Xines, retain their hard edge. This is the part nearest the port and I’m sure there are a few unhygienic tattoo parlours nearby too.

That seafaring trade has mostly gone but the drug dealers, pimps and prostitutes remain, even if they don’t always oblige by appearing. But, or rather because of its colourful history, some of the best bars are here.

We tried London Bar, a very modestly furnished joint with a small counter and a 1930s feel. Picasso and Orwell have been among the notable visitors. The front area was quiet but through the back it was livelier. Especially after a few absinthes.

There were some backpackers, but don’t hold that against the place, because there is a genuine mix of all sorts who bar-go round here. And don’t let the name of our last bar, Kentucky, put you off either. Although originally designed for US sailors it is no more Yank-centric than London Bar is full of expats.

Kentucky is like all the best wild bars, narrow, dark and hallucinogenic after midnight. Some folk complain about the service and the crush and its populist edge but they are over-picky. Just enjoy.

The time and favourable times were flowing so well that I forgot my original intended final destination, Marsella, a place renowned for its absinthe and for being the closest to the old Barri Xines atmosphere.

So it was an incomplete survey, but still a tour close to my favourite way of spending an evening in Barcelona. That would be watching Messi score a hat-trick to break the European scoring record. And that was the next night.