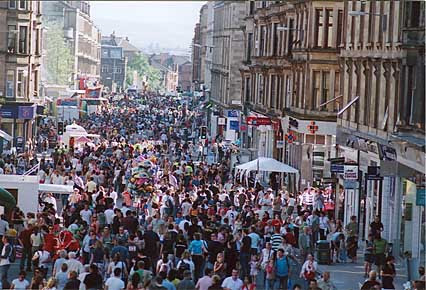 As it’s been going for almost two decades I feel it’s a good moment for me to reflect on my interaction with the West End Festival. I used to take 15 minutes out to watch the eponymous procession down Byres Road but now that involvement has ended.

Mayfest was an earlier version of the fest but now June is the time when the leafiest part of Glasgow attempts to fill the gap left by students after term time. Local businesses were behind its inception knowing that a continued buzz around the area helps trade. Of course, there is a cultural ambition running through the month of events but perhaps quality doesn’t yet quite match the quantity on show.

Was it better when it was smaller and younger? Somewhere, some folk may be asking themselves that question over a glass of alcohol. In parallel I’ll ask myself a smaller question: How does the present West End drinking scene compare to an earlier time?

The focus can narrow down to Ashton Lane and the top half of Byres Road because for many that is the heart of the West End and its entertainment centre.

2001 was a turning point for the area and its pubs. The fire that gutted the Grosvenor Cinema gave Stefan King of G1 Group the opportunity to move in seriously on the locale. Although his application for a late-night club licence was rejected he still pressed on with The Loft – a massive eating and drinking venue on two levels with almost more floor space and capacity than all the other West End pubs put together.

In addition he added another smaller bar underneath – the unimaginatively named Lane – and a cinema, the juxtaposition of drink and the movies a new one for this city. As soon as the complex opened Ashton Lane and the wider area was transformed.

Previously, Ashton Lane had evolved slowly from the 1970s when the only place to drink had been The Ubiquitous Chip. From the mid 80s The Cul De Sac at the other end of the lane attracted a younger, more stylish crowd in contrast to the Chip, filled with lecturers and acolytes.

Jinty McGuinty’s brought an Irish theme early the next decade and not long after Brel arrived with the novelty of Belgian food and drink. None of these joints markedly changed their surroundings – they fitted with the small is great philosophy that set the West End apart from the city centre. 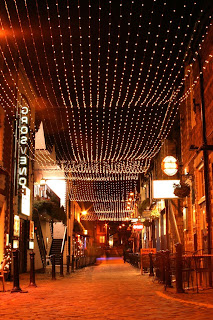 Now, G1 also have the old Cul De Sac – changed into Radio and Nude – and for many drinkers this is how things have always been. Cheap cocktails and shots bring them along the cobbles to the westernmost outposts of King’s empire and Vodka Wodka with its draw of a completely self-contained beer garden allowing booze outside after 10pm.

Jinty’s still does its unpretentious thing helped by some exemplary bar service that gets you your drink quick despite the tiny bar counter. The Chip now has three bars and a broader range of drinkers than before. It remains a stalwart booze provider even though prices have risen faster than inflation over the last couple of years.

Beyond Ashton Lane, the chief development has been Oran Mor. Its birth was overdue - teasers advertising its imminent arrival almost became tiresome - but suddenly one hot July day in 2004 that saw enormous crowds drawn in by a play in the Botanics and the sweltering weather – it sprang open.

My first look at it was downstairs – the only bar then open – and again the scale of the place was what was remarkable. It still is. Theatre, weddings, gigs, events, lunches, dinners, cocktails, whisky, dancing and late nights all take place, sometimes even simultaneously.

The initial mistake of only having one large bar area instead of dividing the space has been addressed somewhat with the late-night cocktail bar that takes over the brasserie after 11pm. Downstairs, while the club doesn’t draw the massive numbers it used to in the noughties, it still ticks over profitably, I’m sure, despite – or maybe because of - the continued residency of the oldest, least-hip DJ in these parts, Bobby Bluebell.

Over the road the Hilton’s Bo Bar seems to be going through a fallow period but it will never be as quiet as its predecesor the carpeted Piano Bar, one of the most dispiriting bars ever to have stocked booze.

Booly Mardy’s, on the other hand, remains a busy joint frequented by people who savour their drink in understated style. Lucky then, that the bar staff here are unusually knowledgeable and this bar is one of the few in Glasgow where bar tending seems to be a vocation.

The other side of Vinicombe Street has the incongruously titled Hillhead Book Club. Students like it but what students and books have in common in 2013 I don’t know. Its predecessor, the relatively sophisticated Gong with its twin bars either end of a large dimly-lit restaurant is much missed, along with its late-night suppers.

West End drinking is today dominated by Oran Mor and The Grosvenor Café (new name for The Loft) two venues that didn’t even exist a dozen or so years ago. They bring numbers into Byres Road that dwarf the previous amounts and while it is now more like a western version of the city centre than a different entity altogether, it still retains enough variety to be worth an imbiber’s time.

But then again, maybe another way of looking at it is that, for drinking at least, the rest of Glasgow has become more like the West End rather than vice versa. Another question, another time…
Posted by The Pledge at 21:44 0 comments