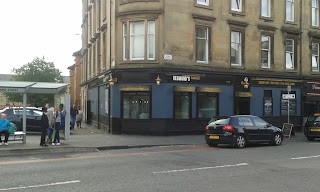 “Eh, I haven’t been that far along the street,” said the barman in Redmond’s, the newest bar on Duke Street, Dennistoun. I had recognised him from Bo Bar and a number of other West End joints, but now he had headed east, and judging from the general thrust of his conversation he felt that he was now part of where it was “at”, the new place to be.

He had mentioned the Duchess Of Duke Street and Bar-B-Que - and The Vintage at Drygate back towards town beside the Tennent’s brewery. But as soon as I told him my pals and I had, that evening, been in the Alexandra and The Crown Creighton, he suddenly became reticent. As if an iron curtain was in place halfway along the Dennistoun stretch of Duke Street, and a corresponding division in his mind between one half of the area and the other.

Redmond’s is clearly in the incomers’ camp, the large variety of craft beers on draught and in bottle, and the emphasis upon food the obvious clues. Its interior is simple, verging on basic, with a low ceiling, cheap-looking booth partitions, and a bluey grey colour scheme. The statement seems to be, “Forget the interior, it’s all about the beer.”

But more could have been done in here, rather than just mimicking Brewdog. There is a recessed den-like area decorated with a mosaic wallpaper – the owners were conducting a family meeting in it the first afternoon I visited Redmond’s – but it needs more, it needs a striking feature or a creative deployment of seating to make it a true focal point. And the toilets need more than just the partial refurb they have been given.

On that same afternoon, a guy walked in looking slightly bewildered, seemingly unaware of the new premises and the changes from when this was Isa’s Bar or Molly’s Bar or the New Variety. He went up to the bar, nonetheless, and ordered…a Smirnoff Ice. I sucked my teeth in anticipation. Others –drinking snobs – would have laughed inwardly at the unsophistication of the guy. But that was what he wanted to drink. No comment required.
Of course, Redmond’s don’t stock alcopops. The barman did his best to sound apologetic but the bloke was out the door in less than five seconds, not waiting to hear of any alternatives if such an attempt was going to be made to suggest them. As a new bar it’s all very being “true to your ethos” as innumerable ad slogans declare, but you still have to offer things to punters who’ve experienced the old place. 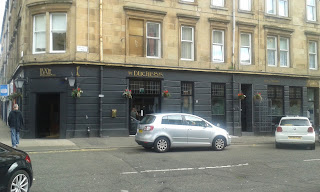 The Duchess of Duke Street, just along the street (but not too far), seems to fit in with area’s history a little better, even allowing for the name being borrowed from a ‘70s TV series set in Edwardian London. Inhabiting the premises of Mills Bar, it is painted black with decent hanging baskets giving the place a substantial, refined appearance, this added to by a pleasant use of dark wood inside.

I also like the full-length glass retractable doors that allow a wide panel opening to enjoy some sun and air, prevailing wind allowing. Other things that work include the slashes of green in the lightshades, the velvet corner of the room, and the boxed whiskies in the gantry. Less impressive elements include the incongruous table top on a barrel, the cut-price toilet refurb and the tearoom look of the main eating area.

Not that this last bit seemed to bother the fair number of folk eating well as I drank. Most of their number were women, perhaps some of the growing number of “ladies who lunch” in Dennistoun. There is a standard list of cocktails in the Duchess at £5.50 – a reasonable price. And the draught beer comes in at the low 3s, with the ‘craft’ beer bottles at a price slightly below what you would pay in the City Centre or West End.

A bearded one had walked in during my more intense observations. His more regular venue was probably The Vintage - that flagbearer of change east of High Street. I recently met a founder member of that enterprise – he now helps drive the development of the Spit/Fire Bar in Edinburgh. Both these joints are interesting spaces with innovative marketing and drink creations/selections. But for some unexplainable reason the two of them are as sterile as the brewing vessels in The Vintage.

And the same tag can be applied to many incoming bars – a severe lack of revelry contained within their walls. I could demonstrate it across the world, if the day (or night) ever comes when I am paid handsomely to tour and review.

They are riding a wave called “gentrification” that mostly destroys more than it creates. OK, bars are just one small component of the whole phenomenon, but they demonstrate the vacuum that the process can bring to an area or a community.

At their worst, these pubs possess no edge, no warmth, no excitement, no welcome, no frisson, no communality. They provide no reference to place or past and render their target area as just another offshoot amongst countless offshoots of the area deemed to be the most fashionable in present existence.

I went on record around a year ago in forecasting Dennistoun as being the “next Finnieston.” Often, being right is no comfort.