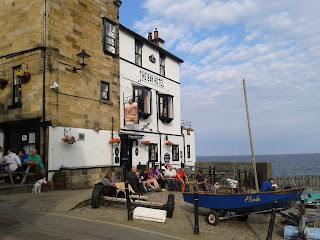 When folk are in need we should all do what we can to help. And many people in the North East of England are indeed in need after the recent extreme floods. So, the entire proceeds of this blog, and it may run into hundreds of pennies, will go to whatever disaster fund has the highest profile.

Enough of the munificence, let’s get down to the pubs on this rather famous stretch of cliffs, bays and sand. The village of Staithes appears to have been hewn out of the sandstone cliffs that enclose it. Down a narrow defile, open only to residents’ vehicles, tiny streets branch off into even narrower lanes between modest dwellings.

So compact is the village that you would think the locals are of a smaller breed suited to life here and on the sea. And the harsh, ragged charm of a place long past its seagoing prime would suggest to uninformed but romantic visitors an association with some legendary maritime figure. Guess what, that notion would be correct. Captain James Cook had his first apprenticeship here. 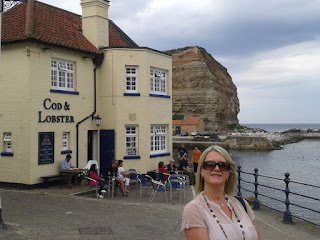 The Cod and Lobster is right on the harbour walls, these boundaries recently re-built, augmenting the already superb natural inlet. The pub’s name promises a better range of seafood than is offered but there are some fish specials to increase the choice. The beer range is better. This is a pub that doesn’t wantonly raise its prices beyond reasonableness. Mainly because of the lack of money in the village and surrounding districts.

The interior is more contemporary than expected with cream walls, leather furniture and blackboards. Despite the nod to modern trends comfort is the aim rather than style. Thus it may well be cosy in winter but in summer the outdoor benches are the place to be round two sides of the building. Great spot even allowing for the strange flies that annoy drinkers. Fishermen amongst you may know if these are fish parasites.

Between Staithes and, the more famous, Whitby is a pleasant coastal journey that can include a stop at Sandsend. This stretch is open in contrast to the coves north and south. Many people enjoy these sands and also, perhaps, the noted high-end restaurant Estbek House and the pub, the Hart Inn. 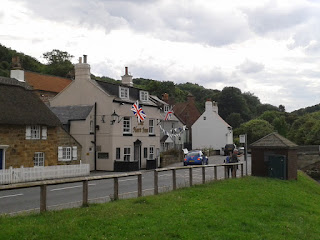 Both add to the reasons to linger round here by the pretty wooded stream that idles into the North Sea. The pub is welcoming with a decent range of booze and a great beer garden.

Whitby is just down the coast and needs a blog all of its own, that – when I write it – will include Gothic references and ripping sea yarns along with bar experiences, of course.

A smaller place that can be included in this piece is Robin Hood’s Bay. The associations with the renowned outlaw are very dubious but this village doesn’t need them. It is the eastern end of the 192-mile Coast to Coast walk and is a fitting end to this major trek.

A very steep cobbled road is the main artery with many branches leading to all corners of the village. Similar to Staithes, everything is packed tight here. This may have helped during the smuggling heydays of the 17th and 18th centuries. Secret passages and hidey-holes are rife. These, along with the partially subterranean local stream explain why it is believed possible that contraband such as a barrel of rum could be transported from one end of the town to the other without it ever emerging outside.

Nowadays, handling booze isn’t quite so risky or surreptitious - if you ignore the health fascists - and there’s a couple of fascinating wee pubs tucked away, including the Laurel Inn. A tiny hostelry with a bench outside that allows you a prime view of those going up and down the hill to the sea. 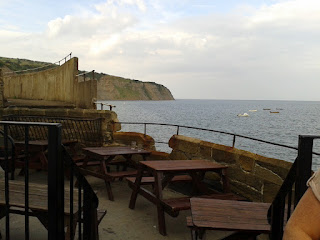 At the bottom of the hill the road becomes a slipway into the perpetually cold waters of the North Sea. Happily, there’s a bar down there – the Bay Hotel - to afford a full appreciation of the setting. The actual bar interior is a tad disappointing; too much faded carpet that seems to date from the last refurb in the 1980s.

It’s normally busy though so maybe the owners don’t feel more investment in the place is worth it. A pity but with a terrace like this one, less important than it might have been. Wrap up if you have to, to enjoy it or the other outdoor area to the side by the road. Either spot is good to watch the waves pound the bay whether at low or high tide. Sit, or stand, and observe the wild power of nature. North Easterners fully appreciate that power this week. 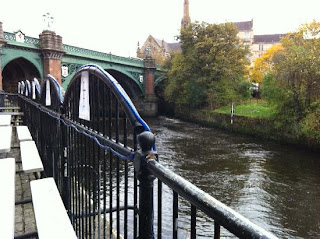 The imminent opening of Inn Beer – 07/09 – in the former Big Blue pushed me into thinking about Glasgow’s provision of watering holes by the, err, water.

Inn Beer will be joining a limited selection of bars that not only are situated near river or canal but actually allow you to appreciate your lucky location. The new bar is to offer craft beer, great cocktails, good grub and fun times. Let’s hope it can make this formula work where others, such as Bruadar, have recently failed.

Its location is certainly a winner. Built into an old railway arch under Kelvinbridge with glass doors opening on to the Kelvin walkway, tables are as close to the river as is legal. Other nearby arches have been utilised for raves and other subterranean shenanigans but that was some years back when this space attracted more custom.

Maybe it was greater competition from pubs and cafes up on street level either on Great Western Road or Gibson Street that led to Big Blue’s demise, a lack of marketing presence to help draw folk down the two levels to the bar – a sandwich board on the street isn’t enough these days – or the fact that on sunny days there was never enough outside seats to keep everyone happy.

If we have a successful newcomer here perhaps other sites will become available by water to add to the small number of licensed premises at present. I know it is the council’s intention to utilise Clydeside further, drawing the city centre in that direction, so they should put their planning where their mouth is.

Just now, the only place for a casual drink Clydeside central is the City Café near the SECC, part of the Hilton Garden Inn, whose management have imaginatively deployed an elegant pontoon.

Going east, The Ferry – the actual old Yoker to Renfrew ferry boat – continues to provide various eclectic club nights, maintaining a tradition dating from the 80s and 90s with stalwarts such as Panama Jacks and the floating fun palace - complete with hundreds of pairs of white stilettos and rejects from Miami Vice - that was Tuxedo Princess.

Six miles downstream there was a straightforward boozer on the riverbank. The Wharf in Yoker sat adjacent to the jetty of the aforementioned ferry. Attracting a devoted clientele, strangers got their fair share of local wit but all in the best taste. The Wharf had limited space but this mostly added to the jocularity.

One of the regular fixtures around the island bar added to the fun with his stoic insistence that he was a member of the Glencoe Mountain Rescue Team. This despite the fact he lived around 80 miles from their base and was drunk 16 hours out of every 24. His fantasy was truly burst one evening when another punter arranged a call to come in from an actual member of the team. On speaker phone to a packed pub he confirmed he nor anyone other team member knew of our delusional friend.

Sometime around the Millennium the dreaded box of matches struck (allegedly) and the place succumbed to fierce flames. Whoever benefited from the conflagration it wasn’t Yoker socialisers.

Directly cross-river and now only joined by a basic passenger ferry is the aptly named Ferry Inn of Renfrew.

The building reputedly dates from the early 18th century and unsurprisingly the interior is a little rough around the margins but details such as window seats and extensive use of dark wood mean the place gains more from its age and tradition than it loses.

The inn is a good enough destination all on its own but it can also serve as either the beginning or end of a crawl through the old town of Renfrew.

As for canals there is also limited choice inside the Glasgow environs. I’ve spoken about Lock 27 before but it is the only Glasgow bar that sits by a towpath. It continues to do respectable business especially during hot summers – if those ever return in this lifetime.

Stables, near Kirkintilloch gets even busier in the heat but is well beyond the city boundary. Another, lesser-known place, that is close to Glasgow is the Glen Lusset in Old Kilpatrick.

Fairly anonymous it may be but it has many features that eclipse the efforts of plenty of places in the city centre. An extensive food counter, raised pool table, conservatory and large beer garden with different levels and nooks all look to have been recent additions.

As well as being right beside the canal, a little stream passes the west side of the garden, the Glasgow to Helensburgh railway line is also close and if that wasn’t enough the huge span of the Erskine Bridge looms above outside drinkers. Quite a spot and made more special by its rarity.