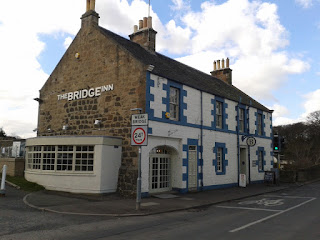 
Prosperous cities cast their wealth well beyond their actual boundaries. Aside from London, and despite the recession, Edinburgh is probably the wealthiest place per capita in the UK. So, it’s not surprising that Fife to the north and, across the firth, East Lothian show many of the trappings of money earned in our capital. Bankers and ancillary professionals have bought up much of this land for first or second homes, raising prices and dominating the neighbourhoods.

One recent day, The Muse, FBB (Fledgling Bar Biographer – if there are any bars left in 17 years time) and I headed east to examine this phenomenon for ourselves. At least, I think that’s why they came with me.

We did, eventually reach the East Lothian coast but we stopped for lunch in a district even closer to Edinburgh: Ratho, just to the west. It’s slightly too far out to be a suburb but too close to be commuter belt. It’s only pub is The Bridge Inn and I’d spotted it a few times from the train. A situation right above the Union Canal made it look particularly inviting and it went down in the wee black book (the book’s original use has considerably lapsed) for future investigation.

The original building is at the road front and is three or four rooms, one with TV and pool table, served by a modest bar. Nicely traditional and a comfortable place to spend a few hours, not necessarily, though, a place you would count on for a real good skinfull. Ratho’s not that kind of place, really. Good times are to be enjoyed quietly with an air of reserve and respectability. Enjoy yourself, certainly, but keep those things in mind.

The nature of Ratho is more obvious in the large extended section of the inn. Large windows and smooth wooden floors give it an airy feel. This is the bistro part of the operation and from here you have an elevated view right along the westward canal. The only better view is, in fact, from the large patio.

A few loud rugby-shirt-wearing blokes were outside – a side event from some UK tour it seemed – but inside it was pure Ratho – local couples out for lunch, middle-aged ladies in intimate groups of old friends and the occasional tourist passing through. The food on offer is fresh and pleasant and not too expensive. It seems the Ratho-ites do their costly fine dining in the Capital itself on expense accounts.

I’ve since learned the inn has its own walled garden a few hundred yards away from which most vegetables used come and even its own herd of saddleback pigs. I had the pork belly and crackling so can vouch for the quality of this product and for the owners’ serious commitment to food provenance. 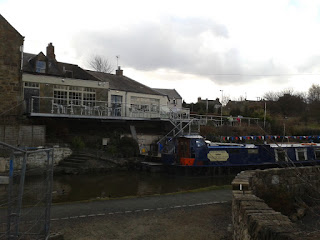 A nearby table were probably aware of all of this as they seemed like regulars. Ten or twelve of the same family. Three generations out for a celebration lunch. The patriarch – around 65 – had the relaxed air only the rich possess and the family beneath him spoke of the professional classes and/or third-generation inherited wealth.

Three seats remained empty and inside five minutes they were exquisitely filled. The son of the main man – early thirties and a presentable enough chap – accompanied by his spouse and son of around five years of age. Mother and son were the attention grabbers. They made the rest of their company look ordinary. The lad – a trendy patch navy tweed jacket probably from Harvey Nicks Kids and his mummy in impossibly white jeans and an effortlessly casual cream jacket either from a boutique in the New Town or, say, Lower Sloane Street if she and hubby had visited London within the last six weeks or so.

Now, the Muse and I make up a decent-looking couple but this was, frankly, intimidating. It is easier to accept in a nightclub where people push the limits of appearance and bling can be as easy to admire as it is to envy but in this relaxed daytim-setting the effect was magnified.

The rest of our lunch was uneventful and I was merely pleased to limit my glances over to THE table. Inwardly, though, I toasted them their good fortune and continued luck ahead, if they needed it.

The Bridge Inn is a decent refreshment stop; a well-appointed hostelry with a winning waterside location. Private dining cruises along the canal are also available as are four very comfortable rooms. And it’s ideal for those not wanting to dip completely into Edinburgh itself for lunch, dinner or drinks.

We continued on our way to discover just how far that city’s tentacles of wealth reach out to grab the surrounding land and people. Gullane, Haddington, North Berwick et al were to follow that afternoon and evening. But that can wait.