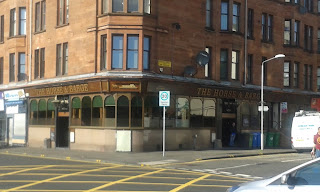 
Clydebank gets by - just. Post-industrial may sum it up. The heavy industry has gone decades ago and nothing substantial ever really took its place. The town’s ‘centre’ is the shopping complex bulked up by leisure sites such as the cinema, bowling and Playdrome. The retail
experience here is a notch below that of, say, Braehead.

There’s a few modest business parks, a large college, two or three railway stations and very little else of commercial note. Quite a stepdown in prominence for a town specifically targeted by the Luftwaffe due to its extraordinary concentration of shipbuilding and other heavy industry.

Bordering Yoker and Drumchapel, Clydebank can be regarded as an extension of the Greater Glasgow conurbation but older Bankies, especially, would object to this description. However, the town does provide cheaper housing than in the neighbouring city thus allowing many folk the opportunity to be able to use the amenities and attractions of Glasgow without paying the premium for being within the city boundary.

On weekend nights, particularly, taxis, buses and trains ferry lots of Bankies into Glasgow to enjoy some nightlife, many only going as far as Partick, but I’m not interested in that phenomenon here – I’m looking at the places that will attract and keep locals. This time I’m concentrating on Dalmuir and Mountblow, the districts at the far west end of Clydebank.

Contrary to received wisdom a place like Clydebank should have a multitude of bars, but that number barely reaches double figures. And for a population of around 45,000, that is a relatively low number, well below my rule of thumb of one pub per 1,000 people.

Dalmuir has three of that number, all located on or near the main road through lower Clydebank – Dumbarton Road. The furthest west is The Mountblow, situated on a quiet corner. 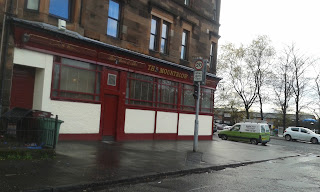 The blinds were down as I approached. Not for my benefit, I realised, but slightly off-putting nevertheless. As if to emphasise this impression, my entrance elicited a few light sniggers and knowing looks between the barmaid and handful of punters. But exposure of this sort is momentary and has to be got over if you want to be a successful or indeed a non-successful bar reviewer of any kind.

And the blinds on this unusually sunny September Thursday served to filter the light in such a way as to render the brown interior pleasingly dusty, rather like a laid-back drink shack of the Southern United States.

I ordered my pint quickly and used the pouring time to establish that the US link was continued by the fair number of framed photos of Yank iconography such as an Ali v Liston – the second fight, I believe.

I sat under the snooker scorer that had lost its table. But sport of some sort goes on here, or at least amongst the punters, if the collection of trophies on the gantry is an indication.

Beside them are a distinctive row of pewter tankards and bells. I never quite felt able to ask to whom these belonged or if there was something down the stairs directly in front of my seat other than just a storeroom.

Many books are stuffed into available shelf and window-ledge space but it is a measure of this joint that I made no move to peruse the collection let alone buy another pint and actually start reading one of them. 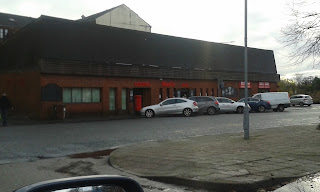 So I was up and away in under half an hour, heading east to the next one on the list – Mackintosh’s, which is adjacent to a dreary selection of shops.
The exterior of Mackintosh’s is gloomy, the dark cladding overpowering the small windows. But this look is pretty typical of bars in outlying urban areas that have undergone ‘60s, ‘70s redevelopment.

Inside is probably of a vintage a decade or two antecedent to the exterior – very basic light wooden furniture and a basic glass gantry with probably the smallest selection of spirits I’ve seen in a bar since the 1990s.

But not holding that against the place too much, you have here a joint far busier than the last, with a more inclusive atmosphere to boot, new faces coming in and out in the time I was there, a revolving, evolving collection of punters one could say. Quite unlike The Mountblow.

In the raised area there was some serious dominoes going on – no blood was likely to be spilt, largely because of the 8 blokes in the two groups at least 5 would be on warfarin – but as close to that state of strife as is possible otherwise.

A more convivial recreation is the twice-weekly fish-tea dinner dances (adults only) advertised on Mackintosh’s exterior and these occur, I believe, in the large lounge area to the side of the saloon bar. The lounge is extensive but doesn’t appear to be in regular use, apart from those fish-tea extravaganzas on Tuesdays and Fridays.

But this was Thursday. I had to go. Leave. Be on my way. There was one more to do today. The Horse and Barge by name, previously O’Kane’s. The biggest of the three, so large that the space taken up/lost by a pool table is hardly missed.

This spaciousness is exaggerated by the large windows that go right around the corner from the main road to the side street. Probably cold and draughty in the winter but on this day of sunshine a pleasant warmth and light engulfs the whole joint, most particularly in the raised area of tables nearest to the windows.

The heat made me wish you could enjoy a drink or two outside, perhaps with a view of the nearby Forth and Clyde Canal from which this pub derives its name, but in Clydebank there is next to no outside provision, apart from a few chairs outside a couple of establishments near the bus station.

But at least this keeps one’s attention focussed on the interior. And in here the main point of interest is the snugs, or departments as they used to be called in old-pub nomenclature.

I edged around them trying to see if there was access to any of the three of them, or even if they actually were snugs. Was I mistaken?
One has its door slightly ajar and I peer in, but all I see are brushes and a mop before the aperture creaks closed. I decline to ask at the bar about the true nature of these features and instead take my pint of 70 and chaser of Scottish Leader up to the raised area.

The 70-shilling was spectacularly off but I didn’t let it bother me. I sat and looked around and wondered if the two blokes sitting at separate tables were prosperous retirees who had just strolled down the hill from the bungalow-heavy district of Overton for a quiet pint or a whisky and Irn Bru with their papers and mobiles.

Hurricanes and the 1968 riots are on the TV but the atmosphere is contemplative and tranquil and somehow it gets more so as over the shoulder of one of those gents I spot a holiday jet rise high into the sky without a cloud to obscure its climb to the heavens. I could almost imagine being in that plane, leaning back in my seat, resting my head – ten seconds later closing my eyes…