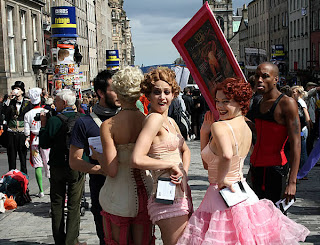 In the middle of this mercurial winter, it sometimes helps the soul to return to warmer days. This time I’ve picked the last Edinburgh Festival to revisit. A world-famous cultural extravaganza, but you know the drill; pubs come first, despite the distractions of shows, plays, comedy, opera, concerts and other performances:

To aid our determination to be conscientious, single-minded reviewers The Muse and I head to Stockbridge for Saturday lunchtime, just out of the city-centre maelstrom for a while at least. Locals still quaintly refer to Stockbridge as a village; an anachronistic notion amidst a 21st century city but it holds some meaning.

Down the hill from the main New Town it does feel a bit different, operating at a slightly slower pace from the rest of Town. Independent shops are more visible here and the scene at the road bridge over the Water of Leith is easily transported in one’s mind back to earlier days of horse and cart or Victorian perambulators.

Hector’s on the corner of Deanhaugh Street and St. Bernard’s Row is, though, very much a modern hang-out. Comfortable dark leather couches along with a generous smattering of tables and chairs, bundles of flyers occupying any flat surface, gig posters pinned to the space that remains. Coffee is as much a favourite here as beer and the vibe in is more of a Sunday morning than of a day earlier, this despite me overhearing the tales of a regular not home yet after a long hard night. Makes me jealous.

No time to dwell on it though because we have a lunch reservation at the basement Italian, La Concha. The food is reasonable, for the fixed menu, but the restaurant is very quiet. So much so that I don’t feel like a port in here. Nor a ship in a storm. We leave for The Bailie.

I need no extra reason for partaking of The Bailie’s charms. Since discovering it last year it has easily reached my Top Ten all-time list. Its superb corner basement location, allowing scope for a raised smoking area and cellars hewn out beneath the road, places you at the heart of the bustling local scene. The interior is dark and music-free but doesn’t detract from its hospitality, a party, of sorts, could spark up anytime. I was enjoying my Deuchars digestif, thinking that, in here, you can order a fine malt or Burgundy as comfortably as you can a beer. The Muse was the one in the rush now, though, hurrying me on with the reminder of our appointment with a friend. 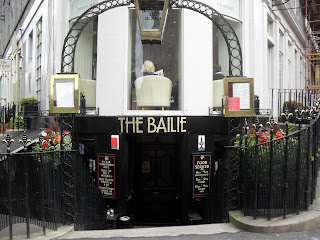 But instead of heading back up towards the city centre I lead her east along St. Stephen Street, then Cumberland Street, to the bar of the same name. “We have the time,” I assure her, as we walk through the mews-land of lower New Town. The Cumberland comes with a good reputation and here on my first visit I appreciate the very clean interior and the large beer garden a level down. The couple of nooks off-shooting the main bar area could lend the night-time Cumberland an extra slice of atmosphere that it needs to rival nearby dens such as Kay’s and The Star Bar.

We won’t find out this weekend because we’re off again, up the hill towards the heart of things at last. Up Hanover Street and The Mound, left on to High Street. We have a call. Our friend is running late, a reversal of roles. But we use it to our advantage, stopping in at The Advocate at the top of Blair Street. As soon as we’re in I’m wanting out. It’s one of these fake traditional places with plastic menus and drinks’ offers. There’s huge interior and downstairs toilets that are as hard to find as the centre of the Cretan labyrinth, all indicators of a chain pub. But at least it’s not a Wetherspoons. The Muse strokes my back, and that helps, as do the reasonably cheap prices and a barman who actually seems keen to talk, without too much prodding, about bar life during the Festival.

But I’ve a reputation to keep so we’re out and away down the street to the temporary bar at the C Soco venue. Bare boards, plastic seating and a rickety tent in case of rain wouldn’t normally do it for me, but context is everything. During these few weeks the atmosphere in these makeshift boozers is unique, whether those round about Cowgate or the bigger spaces down near the university. And, if it is your thing, you can celeb-spot. But we frown upon that; the Festival is nothing if not egalitarian.

Our pal soon appears and I give him an account of our day so far, and he tries to fill us in on his recent exploits. After a bit, he’s off, disappearing into the back of the adjacent tenement where his next show is – comedy reviewing being his bag, a more established form of writing than my own.

Some time later we are on Cockburn Street, specifically The Arcade Bar. The entrance is actually from the close above the street, the downstairs half of the joint somehow familiar, maybe somewhere I entered for a short while last century. Upstairs is, though, definitely new. Its speciality is vodka, in many flavours. This tells of both the enduring popularity of this versatile spirit and the Eastern European influence upon Scotland and its drinking habits. Of course, these flavours mean there’s no need for a mixer. Confusing, for some less cosmopolitan drinkers. We have two of the fruit flavours. 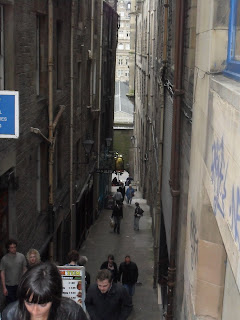 I realise this is the pivotal point of the day, as the afternoon merges with the evening. It could all end here, via a long bus journey west, or we could delve on into the night. To ensure the latter, I take The Muse down my favourite close, Fleshmarket. Dropping steeply down this historic passageway, which leads eventually to Waverley Station, I cannot decide between Jinglin’ Geordie or The Halfway House. So we have a wee drop of our native spirit in each. Again, The Halfway just about shades it, mostly because of its more interesting interior shape and slightly better service.

Reinvigorated, we choose to leave the Old Town, through the station and across Princes Street into West Register Street. The Café Royal, as indicated by its name, is commonly seen as the city’s grandest pub of long-standing. Certainly the plasterwork and panelling in here catches the eye, giving it a theatrical air, and as close as we come in this country to fin de siecle.

I feel though that it can veer to complacency, the service a little too lackadaisical and the regulars careless in the way they move past us. So much so that we are getting pushed further and further towards the restaurant, the seafood aromas making us wish we had planned an oyster stop here rather than a burger half an hour ago.

My previous visit to Auld Reekie had included a visit to Hawke & Hunter, the hotel/club on Picardy Place. Unfortunately I had arrived too early on that occasion, before any of the building’s hospitality rooms had opened. Not this time. The Muse was reluctant to leave The Café but I enticed here with the delights waiting at H&H.

Cocktails were what I meant, and they do serve them in H&H’s cocktail bar, of course. But not with any great aplomb, or attention. The décor wasn’t impressing my partner either. Everything’s pale but uninteresting. An attempt at futuristic we think, but it’s more Blake’s Seven than 2001. We sit at a table but are soon informed it has been reserved. This, in a place almost totally empty. It adds to the feeling that because we aren’t on friendly terms with the manager nor from around here, it is held against us.

To confirm this, the reserve holders arrive and immediately start whispering to the staff and pointing in our direction. They look like they are from Prince Willie’s set, the kind that still terrorise ordinary punters on George Street and surroundings. The Muse is up for a fight but I’m actually happy to have an excuse to leave, despite not sampling the Below Stairs club or the Secret Garden smoking area. Smiling sweetly, we leave them to it.

Our last stop happens to be Tempus, a large bar on George Street, mostly because The Muse’s high heels have at last got the better of her. It’s an unremarkable place, but busy, even for the Festival. What also catches our attention is the amount of folk coming and going from downstairs. It takes a while but we eventually realise the bar is part of The George Hotel, the ballroom hosting the last night of the Television Festival.

So down we go. The only face I spot is the cultural commentator and early Sloane Ranger, Peter York. (Think of a better-turned-out Jonathan Meades). As I would have expected he is immaculate in his cashmere suit, ultra-thin watch on his slim wrist. And that’s it. Everything else a bit of a blur apart from recollections of The Muse persuading me to photograph her with Malachy from Hollyoaks (since deceased). Okay, it dents the pride a little, but it’s that kind of evening when such things can be overlooked.

I mentioned distractions at the beginning of this piece. And we did succumb; to an innovative production of one of my favourite authors, Franz Kafka’s, more famous short stories, Metamorphosis. Some scaffolding and acrobatic actors helped the potentially problematic depiction of a human beetle. The play was largely a success, I felt, just like our day.
Posted by The Pledge at 18:51 0 comments