The Yards of Belfast 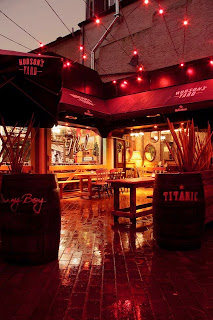 It is now a tradition. We spend Christmas in Northern Ireland. With The Muse’s family. That means rural living for a few days. It makes a nice change from the city, the WiFi blackspots notwithstanding.

But if Belfast calls I don’t take long to answer. I’ve been drinking in its scene for over a decade and I’m always keen on a re-acquaintance. The most recent of these was Boxing Day night with a companion who is a resident of the city. The Muse and BB Junior were heading back further west leaving me with some exploring time.

Our first stop was The Pavilion, nicknamed The Big House, on Ormeau Road. Situated about two miles east of the city centre it can be considered a ‘local’ but it gathers custom from further afield. Part of its fame is its big brother, Lavery’s. That too might have been on our agenda but as things turned out we decided against giving that place or any its relations a glimpse of our greenbacks.

The Pavilion/Big House is housed a red-brick Victorian/Edwardian building of the kind found in the more prosperous areas of the city; an architectural feature that has more in common with England than with Scotland. 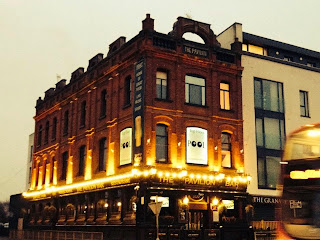 The place boasts a public bar, boutique bar, loft bar, pool room and roof terrace. An impressive list. The public bar, on the ground floor, is traditional in appearance with some decent features worth a second look. I was doing just that – having left my friend to order while talking to a fellow he appeared to know at the counter – when a harsh noise made me turn.

A woman was slapping my companion about the head and screaming. Yeah, you read it right. My eyes were thinking they were seeing things, too. And it got crazier. I step in and pull her away only to be told by the fellow at the bar, “If you touch her I’ll kill you.”

Who knows where things would have gone because here the action was brought to halt by the cavalry, sorry, the bouncers. They proceeded to escort US out the premises. But we weren’t worried; the male and female stewards were very reasonable and told us they would check the CCTV before doing anything. Then the head steward arrived – a big, bald chap with an unfeasibly high voice. More reasonableness will follow, I thought.

“You have to get out,” he said. “They’ve been here for hours and you’ve only just arrived.” My mouth must have fallen open. Or if it didn’t, I should have prised it into that position. How else can you respond to such a perversion of logic? The guy would brook no argument. Eventually, we just shrugged our shoulders. I did consider asking him when, exactly, his balls were gonna drop, but decided against it. Within two minutes we had a taxi, and within ten we were over the river and into Belfast city centre proper. 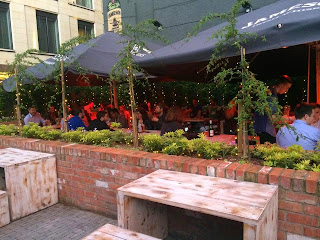 We visited four more bars/clubs that night and three of the four had massive outdoor areas, all well used despite the biting cold. I believe the locals call these “yards”. Even if they don’t, they should. It’s an evocative word that harks back to older drinking days.

But these bars - The National Grand Cafe, Dirty Onion and The Hudson – aren’t old-fashioned drinking dens, they are modern places that attract a predominantly youngish crowd. Maybe a bit too homogeneous on a normal weekend night but on Boxing Day night you get more of a mix.

The latter two bars have yards that are so extensive they merge almost seamlessly with the indoor parts. In The Hudson you walk around the labyrinthine collection of upstairs and downstairs; side room and back room; and yard without really realising where you are, only the slight change in temperature providing a clue.

Amongst these visits we also managed to sneak a quick G&T in The Spaniard, a small bar with no outside provision that, because of its size and warming interior, always has a decent atmosphere. It could just as easily sit in a port in the eponymous country or by a canal in Amsterdam; such is its Europhile nature. 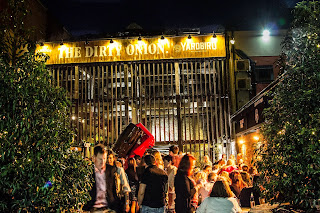 A couple more observations will suffice – Dirty Onion has a section of its yard that is non-smoking. For no reason. Silly enough in itself but even more so the punters standing in this section in the chilly conditions. Why would you?

The Hudson was our last stop. Unusually for Belfast it is open until 2am, the extra hour something we appreciated as we compared whisky with whiskey until last orders.

An hour and a half earlier we had queued for 5-10 minutes as the bouncers regulated the intake. We, and those around us, were patient, knowing that it was only a matter of brief time. A dark-haired woman arrived and immediately walked to the front of the queue and began talking to the door people. She was wearing one of those ridiculous, full-length puffa coats and – admittedly – quite elegant high heels.

She said she was on the guest list and she needed to get in right away. At first the staff seemed amenable but then realised she was on no list on any clipboard they could find. She wasn’t happy and her tone changed accordingly. Very reasonably, the main bouncer told her all she had to do was queue, like everyone else, and she would get in. But if she insisted on being a pain they would have to insist on barring her entry altogether.

Of course, the head doorperson didn’t quite have that turn of phrase, but that was the gist of it. The moral is – don’t try to convince people of your glamour and connections when you look like a penguin in stilettos.

For those of you interested in exactly why my mate was set upon in our first pub of the night – it was to do with ongoing fallout from an ex. No need to say more.