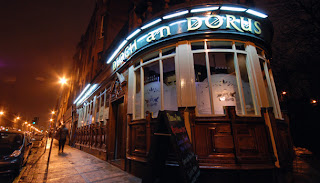 It takes a bit of nerve to change a local son. The Hayburn Vaults had its faults, like a slightly recalcitrant member of the family who refuses to toe the line or move with the times. Sometimes that is part of the attraction of a person/place. And why you get loyal regulars. It might be grimy, it might be a strange shape, it might not welcome every stranger over its door but it’s ours…so would speak the regulars. That group of folk who made it a harsh school of drinkers. Fun, but harsh…

It was, I think, a fairly early Saturday evening there around a decade ago. The mostly male inhabitants were enjoying a mostly quiet drink when the doors were flung open and in walked a loud group of women. One of them wasn’t so loud though. More sheepish. A hen, in fact.

She was following the rest of them, but before any one could even order a drink, the chant went up: “Who let the dogs out…!?” I’ve never been sure whether the song came as a reaction to their overconfidence or the clientele could sense an underlying fear. Whatever real reason, the women were out in an instant, the very existence of the rest of their night in doubt.

The pub was named after the Hay Burn, one of the many forgotten streams that run into the Clyde. Founded in 1904 it was a prominent member of the Partick drag of pubs that attract folk from everywhere further west along Dumbarton Road from Old Kilpatrick to Whiteinch, as well as more local residents.

Oh, and I’ve been informed that the Hayburn was a ‘bluenose’ bar. Doesn’t mean that much to a fan uninterested in football below the top level, and all the Scottish stuff unfortunately falls into that category now.

Perhaps, though, the above fact is a reason why the new owners insist on the edict: NO FOOTBALL COLOURS. Now, being a man of taste, I think such sartorial instructions are like the notice: NO SPITTING; you really shouldn’t have to say it.

Those new owners had taken a sabbatical from pub-running after a successful stint in charge of the Rhoderick Dhu, Waterloo Street (in a period after it was a hang-out of pimps and associated lowlife) and only re-entered the scene when spotting a prime opportunity.

Many months of work followed, the chief fruit of the man-hours being the re-emergence of original exterior features such as the number plate. This may be their attempt to connect with the past, as are contents of the website detailing the history of this spot as a refreshment stop for cattle drovers. But no mention of The Hayburn Vaults, a pity that. As if re-writing history. 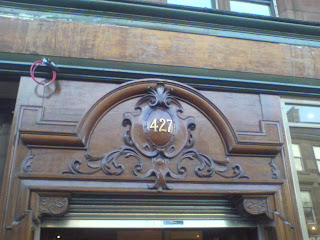 Anyway, the refurb: the bar is of the island variety, in much the same place as the previous counter. The old one was battered and bruised (innumerable heads and other items hitting it at speed over many years) but it was a big solid hunk of timber with a look of permanence. The new one looks insubstantial with an unimpressive gantry, you can’t see it still being here in decades time. Other woodwork is similarly flimsy, MDF in appearance if not reality. None of this is helped by the smell of varnish that was everywhere on the opening weekend.

There used to be a back section to this interior but now it’s a very large single bar area with plenty of tables. On these tables is served what was described in a local free rag as “tasty and great value” this verdict countered by a friend of mine who recently experienced D&D’s fare. But these newspaper reviews are basically adverts. I should know. I’ve tried to cajole various of them to take me on as a reviewer but the replies were of the nature: “It is not parent group policy to hire reviewers or similar. We prefer to feature advertorials.” Great.

So, neither outstanding food nor a massive range of beers. Looking at the long counter space there appears to be a noticeably small number of taps. Not promising for the craft beer lovers, or anybody with a need for variety.

The large interior could also do with something to break its regularity. A large square like this needs a hub, a focal point. I was thinking just these thoughts on a visit to D&D when I started noticing some faces from Partick of a few years back. Not friends or even acquaintances but just recognisable people from places like the Liosmore and The Partick Tavern when Dumbarton Road was an actual pre-club zone.

So the place is attracting a decent smattering of folk out for a good time, rather than just the football fans gorging themselves on the numerous big screens before leaving for home early evening. I haven’t yet myself stayed right on here until the end of the night but I hope the lights get dimmed later, because they’re too bright to create a proper late-night atmosphere.

But my 70-year-old downstairs neighbour, a glamorous granny who attracts many admiring glances, is also a Hayburn Friday afternoon regular for years, is now attending D&D regularly, a measure of recommendation, someone, at least has accepted the changes. She no longer smokes, but her earlier self would have liked the ingenious use of the building-well out back; half-covered, smartly-paved, and with branded barrels to rest drinks and ashtrays.

Perhaps, then, a pub greater than the sum of its parts, able to live up to its name and become a social meeting point for old and new visitors, whether they’ve heard of the Hayburn or not.
Posted by The Pledge at 19:56 0 comments