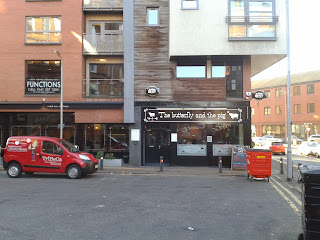 Can The Butterfly & The Pig (West) and The Bank Street Bar (Kitchen and Café) succeed where many others have failed in two tricky Glasgow locations that have never yet been the scene of successful pub operations?

It is a perennial topic on this here blog – is location the key to a bar’s success? Can experienced operators buck previous form for unpopular addresses? Two bars that have opened fairly recently will answer these and related questions by their progress this year and the many (hopefully for them) to come.

The Butterfly & The Pig, was one of the venues that transformed Bath Street from a stretch of city centre offices into an entertainment districts. B&P’s kitsch interior and miss-matching crockery has been much imitated and seen by some as a major trend setter but this humble reviewer actually preferred the bar before it, Spy Bar, despite the silly name.

But now, following the precedent of Bar Soba replicating a city-centre name in Byres Road, B&P has taken over the troublesome site at the very bottom of the same street. Specifically under the modern flats built around 15 years ago on ground most famous for the Volcano nightclub, a favourite west-end last stop for the reasonably trendy and a notable location in the shooting of Trainspotting.

Whites/500 Club was the first to fill the commercial unit beneath the expensive residences and for a while they prospered on a pre-club crowd mostly heading for the, then, Boho. That nightclub, however, continued for a lot longer than the bar here. It closed in the early 2000s and since then a variety of operators have tried their luck, the most ambitious being craft beer purveyor, Bruadar. It too closed despite (or because of) its earnest intentions.

The B&P are probably a more hard headed bunch, and less interested in the niceties of craft beers. More footfall, branding and adding value through food. And the branding part means that you get the B&P look merely stenciled onto the canvas that was an empty bar. 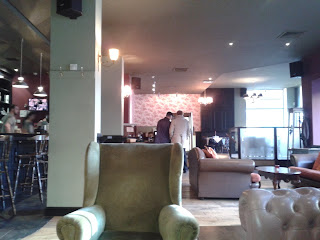 It’s the kind of interior that your wealthy great aunt would inflict on every room of her substantial flat, commemorating past familial generations, as far back as Edwardian, with layers of different styles of furniture and fittings. Or, perhaps, the waiting room of an eccentric notary who has decided to be left behind by the 20th and 21st centuries.

All very charming and appropriate, maybe, for the basements of the elegant Victorian sandstone terrace of Bath Street, not so in a modern building of brick and large windows. No, this context requires a brushed steel counter, the very latest in drink dispensing, clean lines and even some glitz - of the knowing kind, of course. And you could add in some splashes of fabric for warmth.

Lack of warmth is something you experience in the basement toilets here, the un-insulated nature of this area has always been the case but now it seems to have crept upstairs too, I just couldn’t get comfortable no matter where I sat but the coldest part of all was the strange raised area in the corner. It looks and feels more like a place of interrogation than of pleasurable imbibing. 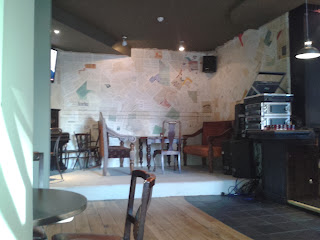 The money behind B&P means that it will last for a while even if the takings are low but eventually we will find out if its incongruity will outweigh the trade it gets from dedicated but undiscerning brand followers.

Number 52 Bank Street has an even longer history of failure than number 2 Partick Bridge Street. Joe’s Garage, a licensed restaurant reasonably popular with GU students partial to a cheap burger, was there from at least the late ‘80s but it has been gone for at least a decade and a half.

Since then? Nothing really. A few eaterie attempts failed despite plenty of effort, I’m sure. The difficult nature of the site prevailed. But why exactly? Parking isn’t ideal on this corner but a lot of establishments have awkward access.

At the time of Joe’s Garage there were no actual pubs nearby – apart from the GU union – but there was a curry house and a pizza/pasta joint. Now, Stravaigin and The Left Bank are long-standing Gibson Street fixtures perhaps making the area ripe for another settler. 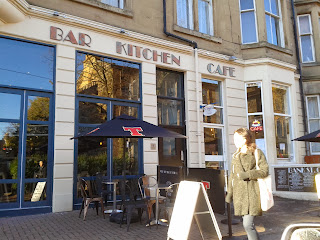 The Bank Street Bar, Kitchen and Café lets you know what is on offer. Booze, grub and… coffee and tea. You would think that all these delights are under one roof, so to speak, but no, the café is separate from the bar/kitchen and is of the traditional Glasgow sort.

The bar is a split-level affair with the upstairs tables a decent option because the large windows afford a view outside. The overall interior is white and bright with a modest counter area and gantry. Quite fresh in feeling and not lacking in quirks due to an interesting variety of light fittings. There is exposed brick and beam but we won’t hold that against them. One word of warning – don’t sit in the leather couch in the left corner if you intend to make it a short visit - easy to get into, hard to escape from.

That they’ve done well on a small budget is apparent in the limited menus. Probably the smallest range of wine and spirits I’ve seen in a while and the food is basic, with burgers taking prominence, just like at Joe’s Garage. None of this may matter as they are going, I believe, for the student market. Let them go for it.

A success here may push the Gibson Street Quarter towards that point where it attracts further interest and becomes the next Finnieston. Depending, of course, on the Licensing Board. Their role is central in all aspects imbibing. With a more enlightened attitude popular areas could respond to demand and adventurous sorts could open completely new bars in areas that could do with a boost. And the question I posed at the beginning of this blog would become redundant.