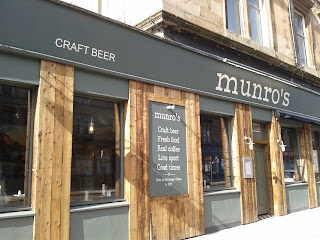 When I heard Brewdog had teamed up with Urban Outfitters to open a pop-up bar in one of the latter’s shops it kinda figured. Because they are very similar brands. Both claim to be edgy but, in fact, they just service the egos of the complacent middle classes.

In many ways the selling of craft beer has come to resemble that of clothes. Shops such as UO TELL their customers how trendy the product is before selling it to them at inflated prices. The purveying environment is faux utilitarian/industrial and the product itself is often more worthy than worthwhile, functional rather than fun.

Munro’s is a recent example of the way premium beer selling has gone wrong by borrowing from the high street while neglecting age-old rules of hospitality and entertainment.

It used to be The Captain’s Rest and I didn’t like it, despite/because of the rumours of what went on its corners after hours. A dark, disheveled almost dank place only ever filled by Woodlands students or local bums, the last time I went I fell out with a pal of my pal but I didn’t care because she was a Captain’s Rest regular. Yet on my couple of visits to Munro’s I have yearned for the old place and its haphazard nature and clientele.

It begins as you approach the bar – the earnest enquiry if you are looking to eat this evening. “Give me a minute,” I muttered, “Let me order my beer before I decide. I know Maclay Inns - also owners of Dram, Three Judges and a growing list of others – “pay close attention to their margins but you don’t need to remind me.” I declined anyway and went for a Thrappledouser from the impressive array of cask and bottled beers.

While he poured, I surveyed the uninspiring gantry and ubiquitous white tiles. That along with the abundance of unvarnished wood fills one with boredom. My server was a big fellow in a pristine apron and white shirt and the three or four others in sight were of similar build and attire. Well, at least they do sample their product – in litres.

I took a high stool and noticed I could see virtually everyone else inside as could everyone else outside because of the large windows that are as customary nowadays as those tiles. Openness and transparency are admirable in politics but not necessarily in pub design.

As mentioned earlier the drinks list is good, particular note going to the revolving cellar of cask offerings. All flagged in the wee brown envelope/menus everywhere but the food is less varied with not much beyond pizzas and platters.

Returning to the booze – as is customary in this blog – I know holding a large range of beers does add to a pub’s costs but it still doesn’t justify £3.99 for a Guinness especially when over the road Wintersgill’s has it over a pound less. You don’t always get what you pay for just like in clothes retailing.

From where I was sitting the smell of linseed was very strong, its presence due to all that wood? But, saying that, there are a few innovative touches that bring some interest to the interior: upturned bales as tables, tyre light fittings and an eclectic selection of low seats and high stools. However, the homestead-look in one corner – complete with stove, wicker chairs, logs and rug – doesn’t fit in at all.

There are a couple of booths but even these have an open aspect and all this space and clear vision of couples and small groups of friends sipping on drinks and nibbling on plain fare made me hanker for the nefarious obscure corners of The Captain’s Rest. This is not the place for uproarious times and gallons of booze, one and half pints here would be my limit.

A bar has to be something more than just the length its beer list and the most interesting joints are peopled by folk wearing everything from tux to grunge not identikit urbanwear that is more conformist than cutting edge.

5 Top Tips for The Grand National 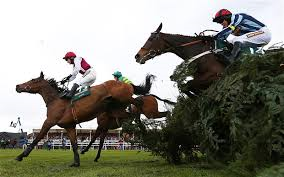 Don't be expecting any insider racing knowledge here - just five places in Glasgow to enjoy the most famous horse race,
The Grand National from Aintree.

Unlike other occasions, when watching sport big is often best. Large screens and lots of people add to the experience.
Perhaps surprisingly, Glasgow isn't blessed with a great amount of good sports bars but here are some worth visiting today.

1) The Old Schoolhouse, 311 Woodlands Road
With coverage ranging from personal TVs by your own table to hanging mammoths there are almost too many
options where to direct your eyes. But once you've decided, settle in for the duration.
The West End's only real sports bar of any size and with a enviable covered outdoor area.

2) Lock 27, 1100 Crow Road, Anniesland
Watching big events by the riverside has always meant something to me, perhaps to others too.
In the absence of any such sporting joints you can make do with canal-side.
The Lock may no longer pull in huge crowds but is still a good option on a sunny day like this
where you can console yourself with a waterside drink after losing your shirt.

3) Waxy O'Connor's, 44 West George Street
There's no escape outside if things go wrong here but you can just delve further into the
subterranean possibilities of this gargantuan boozer. Many screens, many seats, many bars.
What else do you need?

4) Drop, 17 Waterloo Street
Has changed its name a few times and while it now markets itself as a 'late' bar its chief draw is
still sport (football really) and 14 50-inch screens. Those kind of dimensions give most other bars
an inferiority complex.

5) Clockwork Beer Company, 1153-55 Cathcart Road
The southside deserves a mention and here it is. With almost as many own-brewed beers as there are
runners in The National, the Clockwork keeps building a pedigree as good as a top steeplechaser.
And plenty of screens too.
Posted by The Pledge at 10:15 0 comments