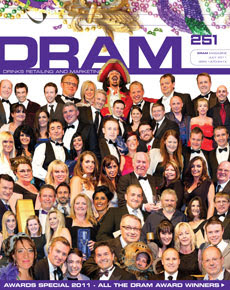 The recent Dram Magazine’s Scottish Licensed Trade Awards were, I am told, a good old shindig for all invited. A musical welcome outside the newish (Grand) Central Hotel and plush surroundings inside were only some of the delights waiting for those lucky enough to be included. The hotel itself has an interesting bar, Champagne Central, the grand but unimaginative name. It didn’t feature in any of the award nominee lists, perhaps because its teething problems remain (see my earlier blog). Anyway, as I mentioned in my Tweet on the awards I wasn’t invited to the jamboree. Evidently they wanted it kept to those in the ‘trade’ not including humble punters or critics. I will, however, try to keep my disappointment hidden within the following comments on the winners and runners-up. Moskito on Bath Street has been a thriving operation for over a decade, somehow managing to feature in the bar scene with barely a ripple of punter recognition. Its confines are best for a low-key night or after work drinks. However, it and its owners must be well-regarded by their peers and competitors, judging by their winning of the Benromach Award for Success in the owner/operator category. The Oak Tree, in Balmaha was runner-up. A good place by the bonnie banks in sunshine, but it needs to do something about its toilets, they get overwhelmed when the crowds appear. In the multiple operator category The Ubiquitous Chip group were victorious, a fair reward for their consistency and subtle innovation, which has continued despite the death of Ronnie Clydesdale last year. Part of the group, Stravaigin on Gibson Street, was unlucky to be just a runner-up, along with the Roseleaf, Edinburgh, in the Gastro Pub Award. Stravaigin’s extension and refurb has been a great success and they must have more than doubled their takings since, the drinking and eating side of the pub now given equal space. The winner, the Birds & The Bees in Stirling must be providing a great service to its customers to have beaten suchcontenders. Whiski in Edinburgh, on North Bridge Street, won the Glenmorangie Whisky Bar prize. I haven’t yet visited this bar but I like the 3 in 1 concept; a whisky shop, bistro and bar in the same location. This kind of business, combining retail with licensed premises is the way of the future for drinking establishments, following the lead of coffee shop/delicatessens that are proving popular everywhere. Kraken Rum sponsored the Cocktail Bar of the Year. The winner, Bath Street Pony, occupies a site that has housed many different bar ventures, The Brick and Tom Tom come to mind, of differing success. Pony seems to be on the right track and has obviously established itself as a cocktail or premium destination, something that none of the previous bars had done. To have beaten such contenders as Bond No. 9 in Leith – absinthe experts amongst other attributes – and Booly Mardy’s – which has probably the best team of bar staff in the city – in the cocktail category, shows impressive development. Staying with great bar/cocktail staff, the winner of the Apprentice of the Year was Niall Webster of Bramble. He is part of an outstanding team. My first visit saw me impressed by the mixing skill and retentive memory of the barman – not sure if he was head honcho Mikey – undiminished by the departure of my brother for being tired/emotional/drunk. You get used to these things. Two Glasgow bars were nominated as New Bar of the Year. Boudoir on Candleriggs is trying to re-invent the wine bar, with luxurious drapes and a connoisseur’s attitude to fine wines, and fine imported beers that go beyond your Tiger and Moretti beers. I remember a 750ml Duchessa from Italy at £16. Expensive yes, but good to see beer being treated with the same respect as wine. Limelight at Hotel Indigo, the other nominee, must be getting good press to have reached such dizzy heights already but it needs to buck the trend of unsuccessful hotel bars and a vicinity that dies after 6pm and at the weekends. It actually won the best design award as well as this other nomination but it may well be a look that is lost on everyone bar hotel guests. In some ways its not surprising that Oran Mor won the Sunday Mail readers Bar of the Year. Its sheer size and location mean plenty of punters who will then vote in greater numbers than most other places. However, it has lost what it once had, the feeling that it was at the centre of things. Six or seven years after its opening there’s still no background music to dampen the harsh cacophony of hundreds of conversations and the smell of stale beer round the bar area is a big problem. For late-night drinking I much prefer the small bar next door – it even has a DJ – or downstairs. The switch of the brasserie into an after-dark bar shows though that owner Colin Beattie is still innovating and listening to what his customers want. Something he’s been doing for countless years across the city, from Jarvies and Granny Gibbs in Yoker and Scotstoun, to the Liosmor, Ben Nevis and many more in the heart of the west end. He was rewarded with the Lifetime Achievement gong. For that longevity, contemporary bar design that doesn’t compromise locality, and his support for the arts as well as the hospitality sector, Mr Beattie was probably the most deserving winner of the evening
Posted by The Pledge at 20:45 0 comments 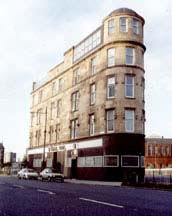 They used to be just about as legendary as The Horseshoe’s lunches. Three courses for £1.99!!! I remember seeing the amazing signs outside the place in the days before I was entitled to walk through its doors. Even then, without any conception of cost of living, bills and other financial burdens, I was taken aback. Another thing that was noticeable about The Star Bar back then was the amount of local workers coming and going from the premises, a real hive it seemed to my impressionable eyes.

Never having been a resident of the South Side my visits as a bona fide drinker have been irregular but on my occasional visits I have seen that, like many pubs, less and less working people were popping in. This is partly explained by how little business seems to be going on round this part of Eglinton Street.

Even the bus drivers after finishing their shifts at the depot on Butterbiggins Road are largely absent, a change in culture or maybe more are using the uninspiring Depot Bar on Victoria Street.

The Star’s location is eye-catching though, sitting at what is locally called a gushet, where two roads meet as in a V. I’ve commented before on certain bars that sit at gushets, The Brass Monkey in Finnieston being one. In that piece I likened it to New York’s Flatiron Building, but the Star’s building resembles that landmark even more than The Brass Monkey’s.

I recently re-visited the Star Bar on a warm day where the door on the Eglinton Street side was open (the Victoria Road side door not) to allow in a bit of breeze. It somehow added to the easy feeling inside, having the street sounds and smells brought closer. It almost made you forget how much this part of the city has declined since the days of the Plaza Ballroom. So much so that the other local bar, called the Maxwell Road Bar at the moment, seems to have irregular hours and may be near to closing for good.

The public bar of The Star preserves some of the atmosphere of the 60s, when the Plaza was at its zenith. The small tables, brown check lino, old curtains over the tile-paned windows and the suspended canopy over the bar counter all speak of that time.

Because of this it does remind you of The Laurieston a mile or so back down the street towards town. The Star isn’t as well maintained though. It’s clean enough but it seems the money hasn’t been there over the years to preserve the place fully.

Not that the owners since 1984, Giovanna and Paul, haven’t done their utmost to keep the pub at the heart of what community remains round here. Friday and Saturday nights see the live bands KT and Faberge, and Kaviar perform respectively and The Star hosts many regulars’ birthday parties and other celebrations.

There’s also board games and domino sets lying around, props to get people talking to each other as much as anything else. The bar staff keep the friendly vibe going too, chatty without being nosy. Many will like the Barrs bottles used for mixers too, a nice touch in these days of strict branding.

In here everything gravitates towards the corner of the room, the wedge-end where the TV sits. So much more interesting than a square room, it seems like the corner is somehow the centre of the space.

And what of the lunches? Inflation seems to have affected even these. Lunches from £2.50 say the signs. For that you get homemade soup or fruit juice; main course of things like Roast Beef, Scotch Pie, Roast Turkey, Sausage Hotpot, all with the trimmings of your choice; pudding of creamed rice or jelly with fruit (tinned). If you want breaded fish or ashet pie there’s a 50p supplement. I call it profiteering.

But wait! Those signs I remember of £1.99 lunches were contemporary with pints priced around £1. So if my memories are actually correct (readers, please correct me if £1.99 is wrong) in that time the lunches have increased by 25% when alcohol prices have gone up threefold. Says something about the various Chancellors of the Exchequer over that period of time.

I went through next door to the Lounge Bar, this extension provided by the progressive 1940s proprietor James Haxton who realised that women needed a comfortable area in which to enjoy their drink and chat. (Thanks to John Gorevan, the Glasgow pub historian, for this fact. He also notes that The Star was called Ye Olde Quadrivium and The Eglinton Bar in the era before WW11).

The Lounge has more comfortable seating than the Public Bar, dark leather booths featuring. It’s darker and warmer in here, just what you would expect in a lounge I suppose. But also more generic, less singular than the room next door.

More folk were having the £2.50 lunches in here. Most of them pensioners. It seems they can afford them. Perhaps they have index-linked pensions or other such complicated financial arrangements I care not to understand.

Either that or they are following the saying “to eat, and to drink, and to be merry, for tomorrow they will die,” – my apologies for amending Ecclesiasties. Whatever our age, it’s a good motto to live by.
Posted by The Pledge at 11:37 1 comments