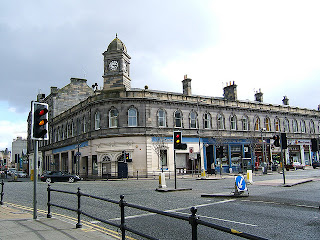 The Central Bar and the old Central Station, image by LHOON

Leith has undergone a famous transformation over the last fifteen years or so. Post-Trainspotting you could call it. The redevelopment has been mainly around the sea/ firthfront and such has been the change that many locals will have almost forgotten what it was like before. Of course the wealthy incomers won’t have a clue, and wouldn’t care either.

The Shore’s row of bars and restaurants, which includes such prestigious residents as Martin Wishart’s place, is the hub of the area’s hostelries. I took a few minutes there to reflect, in the aftermath of what was, ultimately, another bruising encounter with the machinations of the corporate world.

Nae money and an empty stomach

The main focus of that rumination was just how much of a dent in the ungenerous prospective salary would be caused by even a prix fixe lunch in any one of the restaurants here, let alone a Fruits De Mer platter at The Ship on The Shore.

I was, unsurprisingly, soon feeling hungry but needed to get to the other, cheaper parts of Leith. So hungry that I bypassed a pint in Carriers Quarters and the inestimable Port o’ Leith – a rare remnant at this end of town – and even a first visit to The Pond along Salamander Street.

Constitution Street, my route, is grim and grey looking as only Edinburgh thoroughfares can be. Its countenance is brightened by pubs such as the Port o’ and to a lesser extent places such as Nobles.

My pangs were that bad I reluctantly eschewed the well-loved Alan Breck (I wonder how many pubs in Edinburgh have RLS associations?) It was easier walking past the depressingly large Foot of the Walk Wetherspoon outlet. But once onto Leith Walk things brightened up somehow and I couldn’t walk past The Central Bar.

A modest gem of a pub

Situated back-to-back with the old railway station, even once having a direct exit/entrance door connecting the two, The Central is dated from the last year of the 19th century. Its modest frontage belies its cultural importance round here. A mainstay of night and day for over a century and counting, and with a celebrated interior.

The ceiling-to-floor tiling is the first thing that grabs when you enter the large square room. Red, brick-like tiles punctuated by colourful sporting scenes: golfing, hunting and sailing. Long mirrors also break-up the delightful monotony, as does the black plasterwork ceiling, and the excellent leaded glass.

Instantly you feel the old-fashioned nature in here. From the great examples of Victoriana to the mostly elderly clientele, to the way in which the punters regard each other - interact would be too active a verb. Acquaintances are greeted with a nod and a shift of the seat to allow them space at the bar, and strangers are watched subtly for a few moments before being allowed to get on with their own thing.

Getting a pint gives you the view of the famously ornate gantry. It, like the horseshoe counter, is a relatively small thing in this big, high-ceilinged room but it holds your attention. I noted down “mythical winged creatures” for the carved figures, which is correct, but the specific term is “Griffin”. The body of a lion and the head and wings of an eagle. Something I should have known outright, knowing well the pub of the same name near Charing Cross, G2.

The counter has two short modesty screens or dividers or lean-againsts. They are primarily decorative, which is no bad thing.

As hinted at earlier, my budget was tight. So I ordered a half Carling. The Polish barman, however, misheard me, handing me a full one instead. But coming in at roughly £2.50 I felt unable to correct him.

Toilets are ok, but I wasn’t able to find the old door to the old rail platform. On the way I went past the superfluous Over 25s only sign, beside other notices such as No Dogs and No Illicit Substances. Perhaps these are more necessary to keep in line any recalcitrant locals. Bampots, many would call them.

But no such mayhem was anywhere near this afternoon, nor the various bands that liven the evenings. No, just a seat in one of the surprisingly comfortable low-booths. The perfect spot to watch the old guys at the bar, some TV sport, the passing tops of buses and the leaves fluttering up Leith Walk.

Have hip flask will sit

I left reluctantly. Time and empty stomach forcing me onwards. Soon I passed the Spey Lounge on the next corner of the Walk and was tempted to enter this notorious haven of hardened habitués. But no, I continued walking, and by a little barbershop I stopped in a little Polish-run café for a roll and tuna.

It seems that the barber’s is owned by the café lady’s partner. It would be good marketing to have one helping the custom of the other but I couldn’t think of any link. Sitting outside, feeling satisfied by the roll, I topped up my glass of coke with a few measures of whisky from my hip flask. It felt wrong though. It should really have been vodka.

Another great viewpoint, though, to watch the masses going about their days far from the Shore and its fancy restaurants. Mothers with prams, OAPs, groups of kids, Eastern Europeans, other economic migrants, not many suits, the incapacitated. Come to think of it, how badly would pubs be doing if it weren’t for Incapacity Benefit? There would be even more going the way of the boarded up Balfours Bar a little further up the street.

All around, lives planned from day-to-day, giro-to-giro, payment to next payment from the Cheque Centre. No expenses-lunches, or afternoon teas with the girls, or easy breaks between lucrative contracts, nor enough money to engage an advisor for financial planning.

Suddenly I was up and off to meet somebody within the maelstrom of the Festival, but nobody round here seemed affected by what was happening up in the city centre. They hurried by in all directions, eventually heading home today or tonight or tomorrow morning, to homes that would definitely be somewhere other than the expensive pads by the water in new Leith.
Posted by The Pledge at 16:58 1 comments 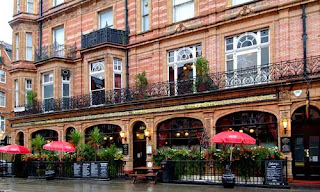 The Audley, 41-43 Mount Street, Mayfair, London W1K 2RP Walking through Mayfair recently (as you do) it suddenly occurred to me why this district has always held such prestige. There are many other wealthy areas in a city that’s one of the world’s largest money pots: Knightsbridge, Belgravia, Chelsea etc but none of them quite carry the same mystique as Mayfair. And the reason has more to do with just its position on the Monopoly board. Mayfair’s name was made before the Mayfair Set of the 60’s but those ruthless tycoons cemented the area’s position as the most fashionable and indeed clubbable London district. Clubs like Annabel’s and Tramp (lavish new smoking terrace recently unveiled) were the byword for celebrity hangouts in the 60’s and 70’s. Those names are now seen as old old school but in recent years Mayfair has poached much of today’s top celebrity scene from neighbouring Soho, pulling in the A to Z listers with clubs like The Embassy, Mahiki and Whisky Mist. I wasn’t looking for anything as bling or booming as these haunts. Just a wee pub to sit in for around half an hour. And I wasn’t interested in finding something mockney owned by Guy Ritchie and similarly over-exposed and under-talented associates. So, something humble then, or at least as humble as is possible in these environs. I had gone past the best-looking hotel in London, Claridges, but had lacked the nerve to go past the doormen to sneak a peek at the art deco fumoir and rest my tired feet that had taken me from Euston at the same time, so I resolved to enter the next place that looked welcoming. On Audley Street, which runs roughly north to south, I spied a pub of the same name at the corner with Mount Street. In I went. It was reasonably busy already even though it was still late morning. Nicely darkened interior with chandeliers that wouldn’t have been out of place in an expensive restaurant or hotel. Looked like plenty of staff but there was a pause before service, which I only tolerate because it gives me more time to look around without anyone suspecting I’m a tax officer or other such snoop. I did notice the red ceiling, the lustrous red ornate kind with elaborate plasterwork that feature in so many London pubs. The deep red above goes well with the black and white chequer board strip of flooring in front of the immaculately polished bar. When I was served I took a Tribute ale from the St. Austell brewery. Quite an enjoyable beer it was too, sitting outside in the double enclosure they have going; the original railings and their own demarcation of the wide pavement getting as close to a beer garden feel as the surroundings allow. Customised troughs for cigarette butts, powerful burners, and plenty of foliage complete the thoughtful outdoor provisions. So comfortable it was that I was nursing my half pint (I had a business appointment in Hammersmith so had to stay reasonably compus. It proved to be another dead-end appointment, but I wasn’t to know that then). The lunchtime rush hadn’t begun so I was left undisturbed by other patrons or staff so could peruse the food menu at ease. Taylor Walker the pub owners seem to go big on British classics, such as fish and chips. They even detail on their website how many they sell across their string of London pubs. 10,000 a week! I picked up a few more details from their website such as Michelle Obama’s impromptu visit a couple of years ago and the Audley’s other celebrity patrons. The only other thing I noticed on site was the neighbouring Cellar 41 Pool Club, something a little out of place round here. A little further along Mount Street is Scott’s seafood restaurant, a distinguished place reputed to be Ian Fleming’s favourite. He’s the sort of fellow you associate with Mayfair. I left for my appointment that I hoped, vainly, would furnish me with a few more pennies, not a problem for most Mayfair residents. And that’s one of the points about it. In Mayfair you feel detached, protected from the rest of the world. Partly because it’s cosily enclosed by Park Lane, Oxford Street, Regent Street and Piccadilly. And partly because the shops, banks, restaurants, clubs, businesses and embassies here inhabit somewhere other than the real world elsewhere. But that’s what you think once you leave Mayfair and look in. From within, looking out, it’s quite the opposite. Merely a matter of perspective.
Posted by The Pledge at 22:53 0 comments