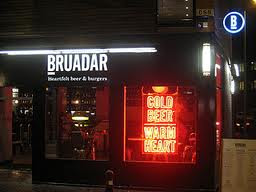 The answer is the same for all these questions; they visit a pub. Preferably a new one.

Bruadar is probably the newest in pub in this small city, opening early to mid December. Taking the licence of a troubled site at the foot of Byres Road. Troubled, because the licence and the ideas have passed between various owners’ hands over the last decade with no one yet making a sustained success of it. The Millhouse, The Byre and The 500 Club have all occupied the two floors beneath the main complex of flats built around the turn of the century.

This residential development sits where there was a patch of open ground and the locally famous nightclub, Volcano. Used for a scene in Trainspotting, doubling as an Edinburgh venue (just like Crosslands pub a mile and a half up the road), and the reason why I and many of my peers can’t stand Becks bottled beer. In Volcano they sold it cheap in stocks so large they didn’t bother to chill it. Now, Becks needs chilled for it to be at all palatable, but we had tight budgets so swallowed, as it were, the serving mistake. The stuff probably did the trick, as far as I remember, but the trauma remains.

Closer to today, The 500 Club was my favourite of a mediocre bunch of pubs. It also was the closest to being a pre-club type of bar, the emergence of nightclub Boho opposite the Western Infirmary seemingly a godsend. But the link didn’t stick, people arrived at the club straight from home or from bars further away.

And no succeeding bar has got any nearer to thriving. These things exercise bar chroniclers like me and @Borrachoeneldia, as they did on this visit in the Xmas run-up. Bruadar’s interior also took up some of our discussion.

The hidden beer taps placed at the back of the bar area are as confusing as they are unusual. They even had me – seasoned bar-goer in anybody’s lingua franca – enquiring about their bottle range as I assumed their draught wasn’t on yet.

But the recessed taps show the intended theme here: stylish and contemporary, chromes and smooth surfaces. But not a unified theme. The seating is mostly bench-like, basic and hard and wooden, along with picnic tables. The kind of seating you inhabit in a Bier Keller in Germany as you gulp from a Stein. Probably the expected setting for the main draw in Bruadar, craft beer. 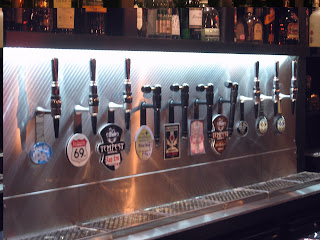 The owners, Thomson Fuller, have tasted success with pub operations in Dundee and Edinburgh. Their first foray west has pinpointed the sourcing of cask beer from small and local breweries as being the key to success. Perhaps it is unfortunate that they have located this attempt adjacent to The Three Judges, and only a few hundred yards from Brewdog, arguably the two bars in Glasgow who concentrate the most heavily on craft beer.

The local is good, wholesome is best, authentic is King are the maxims behind this pub. Indeed one its tag lines is “Heartfelt Beer & Burgers” which although gives their message is way too earnest.
Maybe it’s a prejudice of mine to think that craft beer and a slick interior don’t go together but it is only the Belgians who have yet successfully married beer headlining the show in a sophisticated, elegant interior. Bruadar’s pool tables upstairs don’t do anything to change that feeling of mine.

So an uninspiring refurb and one that missed a wow feature that would have been the talk of Partick if not further afield. How about a raised area of seating with one chair facing right up the length of Byres Road? This was Borrachoeneldia’s idea and the best of the afternoon. It would be the ultimate in VIP seating.

Another good idea was sharing a bottle of Lovibonds Dark Reserve despite the £15 tag. I have mislaid my tasting notes from that afternoon but do remember the caramels that lingered on the tongue. I logged extensive detail on the notable fragrances, colours and tastes from the beers we sampled in my wee red book but it was lost somewhere between the pub and home. Anyone who finds it should place it in an envelope and address it as follows: FREEPOST, THE BAR BIOGRAPHER, THE NEW WEST END, GLASGOW. It will get to its rightful destination.

Anyway, the other beers, bottled and regular or rotating draught selections, included Black Isle Dark Porter, Profanity Stout and Goldeneye Pale Ale. But the winner was the Tempest Red Eye, brewed in Kelso. It took the promise of the Lovibonds and delivered on it. A fully rounded flavour with no discordant notes (there, that’s not bad for an off-the-cuff description) meant we had to repeat the pleasure at least twice.

Around that time we called an end to the Bruadar experience, made our final pronouncements on its future and shuffled out the door. Our verdict was that it will have to work hard to last long; location, niche and market conditions all against it. But hopefully it trades well because the Scottish scene needs quality of product put at the forefront, and hopefully they don’t expect too generous deals from all these smaller breweries.

Word since Xmas is that Bruadar has experienced some busy evenings amidst the quietest period of the year, but observers noticed that the Tennents was proving more popular than the craft offerings.

As for our afternoon, Borrachoeneldia headed to his favourite Friday bolthole (even though it was a Wednesday) and I began walking up Byres Road looking for even more adventure. Somewhere on that journey, as mentioned earlier, the wee red book was lost. Remember please to return it, if it resurfaces, to the address above. You will be rewarded. Maybe not in this life…
Posted by The Pledge at 15:02 0 comments 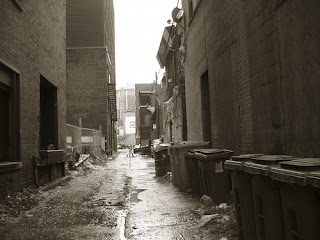 Many of my best memories come from times spent in alleys. In my youth I would often walk home via as many alleyways or lanes as possible, seeing how much of the main roads and bright lights I could avoid. I even raked some back-of-premises bins in desperate times in the mid 90s.

These were the days, or rather the evenings, before the Bar Biographer was born. As was the night running into the early morning in the lane behind Oran Mor when, behaving contrary to my usual predilections, and amidst pouring rain, a sodden mattress, various other bits of broken furniture, toxic waste and kitchen slops, I met a gorgeous, passionate brunette and we damn near consummated our never-to-be relationship. I refuse to say any more about it, other than state the fact that bar reviewers can have their hearts broken by more than just a beautiful pub interior.

Adding to the list of alley adventures there was the time in Barcelona, once again after a nightclub’s chucking out time, near the Placa Reial in the Barre Gotic. This escapade involved a prostitute pestering me for sex for a full thirty-five minutes while I waited for friends to emerge from the underground club premises. It soon escalated into a stramash that unfolded down several dark alleys and included her pimp, a large stick, local residents emptying buckets of unidentified liquid down three storeys and officers from the Policia Nacional, when I realised she had somehow extricated a 20 Euro note from my front jeans’ pocket.

The situation was resolved but not to my satisfaction. Still out of pocket, as it were. However, on returning to my hotel, I did have a faint recollection that I had, in fact, spent that last note buying a round for a group of impressionable – I’d hoped - women.

At present only a handful of establishments in Glasgow utilise this superb brand of location by placing themselves in the streets behind the streets. Universal, in Bath Street Lane; Stereo on Renfield Lane; the famous Horseshoe, Drury Lane, along with the bar formerly known as O’Henry’s; and of course, the bars that make up Ashton Lane.

But these are almost exclusively old developments on lanes that have become regular thoroughfares, no real mystery to them and hence not much romance or atmosphere either.

Edinburgh has a few notable pubs in its Old Town closes, The Jolly Judge, Jinglin Geordie and The Halfway House. The New Town has its counterparts hiding in various mews. An eclectic bunch featuring Kay’s, The Star Bar, The Outhouse and others. These too, though, are places of long-standing.

What I would like to see is the use of some narrow, ancient, decrepit, forgotten alleys like you get in the aforementioned capital of Catalonia. There, you walk down one narrow street into a narrower alley then into an even narrower back alley, and just when you are thinking of turning around you find the best wee cocktail bar in the world or a 3 Michelin-starred restaurant.

I know there is a problem of city architecture here, old streets and wynds having been cleared by the City Improvement (!) Trust over the years, but I don’t care. I’d send in the bulldozers and the excavators to reverse these changes if thats what it takes.

Failing that there are interesting little ways off Trongate, and other central areas that could be ripe for little joints. Free houses with just a hatch or single door and room enough for just a handful of punters.

Clubs have been leading the way, opening up in unlikely back street settings: Buff Club, SWG3, The Glue Factory and The Flying Duck are notable venues.

In the meantime, while I plan my approach to our city planners, how about some bars opening in Anchor Lane between West George Street and St. Vincent Place? Take a look down it next time you’re near Queen Street Station. You can picture the scene, a new city-centre oasis of attractive bars, a wellspring coursing with people of all ages having a good time; because I’m not the only one that enjoys hanging-out in alleys.
Posted by The Pledge at 15:58 0 comments