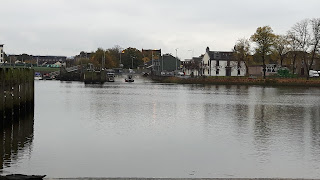 
Standing at the back of the only urban ferry in Scotland I looked across the river at my first pub of the day. The Ferry Inn, Renfrew, is its unsurprising name.

It was 2.30pm. It was only a 5-minute stroll to the Yoker-Renfrew Ferry and a wait of a couple of minutes for the small craft to cross the Clyde to pick me up. There was a ferryman and a trainee on board. I chatted to the younger guy as we made the short sail. He asked me if I remembered the previous ferry. I replied that I remembered the car ferry from the ‘70s. He looked closely at me, shaking his head. Well, I don’t get plenty of sleep and drink lots of water.

Talk moved onto a proposed bridge from Yoker to Braehead. Renfrew locals see this as a lifeline for their town and there is even discussion of moving the town hall to Braehead. This plan was repeated to me by the bar manager in the Ferry Inn beer garden, some 20 minutes later. I had already sat in front of the fire for the first few draughts of my first pint, the inn surely one of the few pubs left in Glasgow with a real, operating fireplace. The fireside and the recessed window seats are the best spots in this joint, which is let down a little by the widespread use of Artex. The beer garden isn’t particularly pleasing to look at either but functional. And talking of functions, there was much chat amongst the staff about their do that night, a Halloween party (this being the closest weekend night to that date) but I couldn’t hang around, I was soon away up the main road to Renfrew town centre. 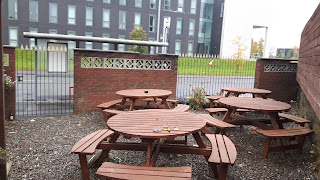 I soon turned off onto Meadowside Street, though, to take in Pickwicks, an isolated pub beneath an isolated tenement block. You get the picture. Inside it’s big but not too impressive with numerous modern touches that don’t work – such as a false ceiling and a cheap, light- wood counter. It might be an OK place to watch the football and other big events but that’s about it, I think. There’s also a strange notice stating that there is no entry after midnight. I can’t think there is much demand for that but maybe I’m misjudging the area.

Cottons, which is back on the main road towards the town centre, is a better stop than Pickwick’s, without a doubt. This pub is split in two, the right-hand section a cosy public bar, full of atmosphere even around 4 o’clock in the afternoon, and somewhere where tartan carpet actually works in an urban setting. There were obvious regulars dotted all over, but there was no cliquey feel about the place.

The pub has a decent beer garden so I set off through the second half of Cottons to find it. A barman, though surprised by my request, opened the appropriate door on the far side of the restaurant/function half of the joint. A few wooden tables and benches in gravel made up the garden. A bit bleak but what could you expect late October? 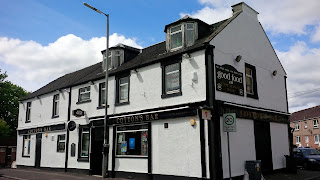 I lasted 25 minutes outside, long enough for half a robusto, before returning through the pub to the exit. Cottons is worth a return.

So is the Black Bull, a pub a few hundred yards further on, in the middle of what you could regard as the town centre. It’s got a wide whitewashed frontage and has no functioning windows. Two doors too, on either side of what I think is the close entrance for tenement flats upstairs. So, I tried the first door. Inside was a very small space with a very small counter. Something made me walk straight out and try the next door. This reason wasn’t booze, it was only 4.30 and I’d had barely three pints.

The second door led to a slightly larger space, this differing from the first in that it had people in it, around 20 or so. I walked to the far end of the bar counter and ordered. Beside me were an attractive couple. The guy, 50-odd, and his younger partner - long brown hair and tall – were in easy conversation. Normally I would have attempted what I imaginatively describe as “the eavesdrop” but this time it felt wrong, they looked so attuned. Most of the rest in the bar were older single guys but there were a group of three women in their 30s near the door. 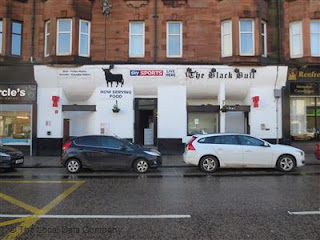 After getting my pint I left it on the counter and investigated the layout. Soon I discovered the reason for the unusual double frontage – there’s a passage at the back (no laughing, please) that links this room with the smaller one. How it manages to circumvent the close, I don’t know, but it is an interesting quirk. As is what can be described as a darts alley, an oche and dartboard separated from the rest of the saloon by a screen. Don’t know if this is for safety reasons or it is just a design flourish. Anyway, I like it.

And I liked the Black Bull in general, a well-timbered interior populated by folk motivated by chat, rubbing shoulders and a comforting booze-up of a Saturday late afternoon. The evening promised even more fun. Whether the Black Bull would actually provide it is irrelevant, the promise was all. 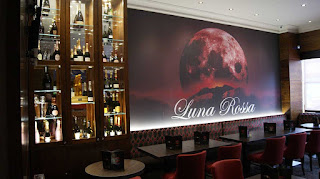 On the other side of the road is the Luna Rossa, a completely different joint. It markets itself as a cocktail bar and bistro and is owned by the family behind the nearby Piccolo Mondo restaurant, which itself has a sister eatery in Glasgow city centre.

Dark wood panelling, red upholstery and a gantry and cabinets stuffed with premium spirit and wine brands reflect the owners’ purpose here – give the wealthy locals of this part of Renfrewshire a place to rival the fleshpots of the city, a place to flash the cash and impress. And why not? Often in Scottish towns outside the cities, the local Italian restaurant is the place people go for special occasions and slap-up Saturday night dinners, and I think Piccolo Mondo fits that bill here in Renfrew. So, the family now have seemingly cornered the market for premium food and drink in the town.

I sat on one of the bar stools, took five minutes to examine the drink list, then ordered a Disarrono Royale and watched the barman prepare. It’s an easy drink to make but the guy didn’t quite have the accomplished air of some of his city equivalents, and as for the drink itself, it needed some fruit accompaniment.

This was now 5.30 and various people were popping in and chatting to staff, as if arranging their visits later. I won’t say I felt left out by these interactions but I was given less attention than these obvious regulars. And my departure was unnoticed, not even the barman enquired if I wanted another. Perhaps they are satisfied with their regulars’ custom – a risky attitude to have in the licensed trade.

My last visit in Renfrew was The Kind Man’s, back over the road again. It’s a no-nonsense joint with one circular bar serving what is, in effect, two separate rooms. The chequered floor is a pleasant feature which I imagine is original, and the prices are reasonable. Now an hour after The Black Bull, the Saturday night atmosphere should really have been greater but the extra space in here dissipated it, that and its more conventional shape.

Despite that, I was still sorry to leave this pub, and Renfrew itself, when I drained my whisky, but I had a bus to catch.
So, six bars visited, about the same number to visit to complete the set in Renfrew town centre.

Therefore, my return is guaranteed (the usual provisos withstanding) whether I arrive by boat or not.