Do you know a wee place in Barcelona? Hundreds, actually... 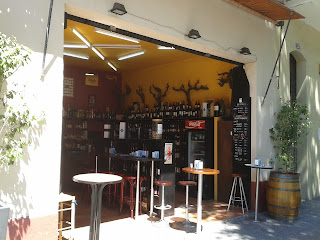 I’m recently returned from Barcelona and I know you are clamouring for my opinions on the place and its drinking. This my third time in the Catalan capital and again I have to largely ignore the overtly high-class drinking experience you can get in any number of elegant hotels and swish bars especially on and around the broad avenues of Eixample and Passeig de Gracia or up in the rarefied heights of the Zona Alta.

Not because there is anything wrong with these places, I like champagne cocktails and impeccable service as much as the next man (but if he’s an ordinary man those times belong to before 2008 and The Disgrace) but experiences like this are generic especially with the high incidence of hotel and bar chains across the major cities of the world. And that’s without the considering the ubiquitous awfulness of the Hard Rock Café which sits at the main square Placa De Catalunya. 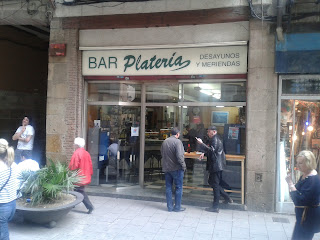 No, what stands out for me is the kind of small place you find all over Barcelona, from the tourist areas to quieter neighbourhoods, and from Barceloneta to Les Corts. These can be little more than off-licences that allow you stay and drink your purchases; formica-countered bars serving cheap pintxos and sherry; hole in the wall no-table-jobs; or even bodegas with no bar counter, just barrels on the walls and a few rickety tables.

Most days can be spent in Barcelona just wandering through the narrow streets off Las Ramblas in areas like El Raval and La Ribera as well as the Barri Gotic itself. Around here form has benefited from function with the small spaces creating tremendously entertaining mini-hostelries.

Sure, out in the sunshine of the numerous squares is fun too, but if you are sitting at an outside table there is little difference between one bar or restaurant to the next, they become interchangeable, as generic as the chain bars already mentioned.

There will be more on Barcelona in later blogs, one at least will look at the particular experiences of night time imbibing in this great city.

But for now I will describe one of the best wee places I came across during the trip. Bar Bodega Montse sits quietly on the Carrer De L’Arc De Sant Agusti, by the church of the same name, in the middle of the once notorious El Raval district. Tourists would have feared to tread around here but things have gradually changed, a Spanish gentrification perhaps. 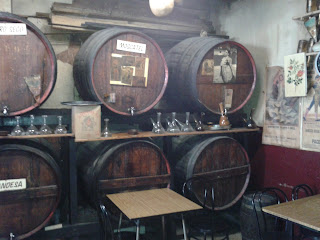 Many of the old residents appear to be still around though as well as the habitués of this traditional, basic bar.. They came and went during our couple of hours spent there, mostly old chaps, some derelict, some compos mentis, all regulars.

Our bottled beers and wines came without a fuss. No bar counter, just straight from the fridge or barrel stuck to the wall. Back to basics indeed. Great.

The only problem my female companions encountered – including The Muse, not slow to come forward normally – was enquiring about conveniences. They had to go to next door restaurant.

I used the open sesame “servicio, por favor” and was led to the place by the owner. It turned out to be a cupboard, basically, with a shower base, a hole, two taps - one for hands and one for excrement - and two foot-plates. 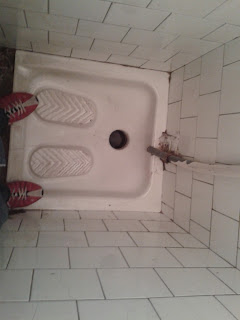 Rudimentary, yes, but it gave the feeling one had found somewhere quite hidden, forgotten almost, amidst this bustling, modern, international, seemingly completely-charted city.

My friends might have found this rather scatological but nevertheless we all continued to enjoy the rest of the afternoon in the shadow of the walls of the ancient church.