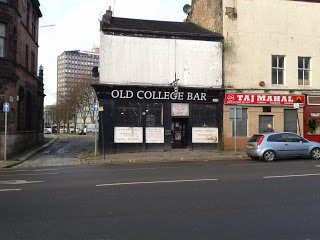 As, unfortunately, time only seems to point one way, sometimes it’s nice to defy the currently established laws of physics and look backwards as well as forwards, maybe even simultaneously. So that’s what I’ll do here, before the passage of time renders it all mightily insignificant.

One of the aims behind this blog was to link the present with the past, specifically (though not exclusively) Glasgow bars with their previous incarnations. Largely because it is hard to think of any other shared, community assets that a person of today can sit or stand in the same place that their forefathers and foremothers did, and then do exactly the same thing they did too – take a drink.

Perhaps libraries and museums are further examples of such shared and continuous heritage but they lack the number of pubs and most definitely their conviviality. Bars are living history and are aptly described as “people’s palaces”.

So it is nice to hear some first-hand responses to this blog that tell of people’s own connections with pubs, stories that link them and their families with the life of a bar mentioned in my musings herein. Three spring mos prominently to mind. 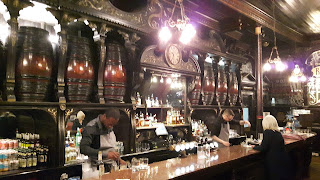 Anne Fox now lives in the States. She used to live on Admiral Street, as a child, just round the corner from the Old Toll Bar. Coming across my blog, she decided to email me about the bar. In her early years, she was, of course, unable to enter the premises but she has fond memories of its role in the community and its use by her family. Her recollections included stories of a major subsidence issue with the building in 1954, leading to her mother having to throw the young Anne from the window to safety, and a tragic gas incident which resulted in the death of Anne’s grandparents in the mid-1960s.

Having emigrated around half a century ago, she returned to visit the area about two or three years ago and was disappointed to see the Old Toll unoccupied and in a sorry state. However, my blog alerted her to the reopening and resurgence of the bar and when she returns this autumn she intends to visit the Old Toll and raise a toast to the past with old friends and her cousin, her only remaining family member from those distant days.

A posting of mine from a few years ago, surveyed various unheralded bars round about Parkhead Cross and received a generous response from a local, Mo. He recounted light-hearted tales from the hostelries of the district frequented by his father and other relatives, most notably the gigging exploits of his brother Tommy, an accomplished guitarist, whose virtuosity on his instrument of choice didn’t protect him from the indignity of stepping aside every time a punter wanted to use the pub’s toilets. Aye, space is precious in the Glasgow bar.

The last anecdote I will mention relates to a bar I have concentrated quite a bit of attention on in this blog, it being recognised by those most knowledgeable on the subject as the oldest bar in Glasgow. Standing in a bar one day, appropriately enough, talking to a barman about my blog and specifically the fate of the Old College Bar, a woman of around 40 nearby, enquired if we were indeed talking about the bar on High Street.

Now living in the West End, she was originally from Castlemilk and she told me that the Old College Bar was where 30-odd years ago her father, then separated from her mother, would pop into the Old College after he had picked up her and her sister from their mum at the weekends. He would catch up with his buddies and have a couple of pints while the girls would be indulged with soft drinks and crisps. All refreshed, they would be ready for the long bus journey to his home. For this lady, the demise of the Old College, if and when it goes, would be a severing of a link to her past, bittersweet though it was.

Three everyday stories, no more, no less, but all illustrative of the important role pubs have played and will continue to play in the lives of the folk of Glasgow. 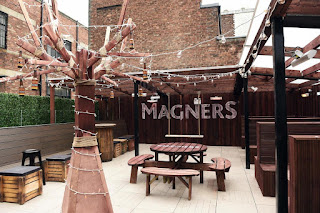 So that’s the past dealt with but we have to always look forward, there is no choice - unless the B-Theory of time can be proven - so here are my plans for the near future, some of which may creep into this blog.

I preferred the previous incarnation, Universal, but Malones in Sauchiehall Lane have piqued my interest with their newly constructed rooftop cider garden. I will be visiting it very soon. Coincidentally, there are a few plans for other rooftop bars across the city, including the Radisson Red hotel near the Hydro, due to open in April, and I believe another similar offering at the hotel under construction south of St Enoch Square, also overlooking the Clyde.

Less welcome, for me, are Brewdog’s plans for a new outlet, Hopworks, on East Campbell Street near the Barras. The most recent developments in the area, St Lukes, and A’Challtainn are joints that are sympathetic to the district and to its history. The arrival of the Brewdog chain to east of High Street suggests gentrification rather than benefit to locals. On the upside, the plans do include a beer terrace. 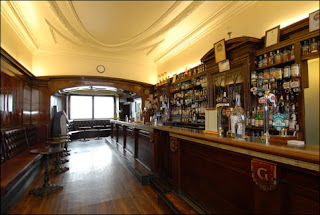 The Viking Bar on Maryhill Road continues with its radical refurb, installing, for example, huge windows on its west and south sides. I visited a couple of months ago when works were around halfway completed, I will return once everything is done and dusted.

Not too far away from the Viking, up in Possil, the Balmore Bar has reopened after a lengthy absence. It is looking bright and dapper and I will include it in a proposed survey of in and around Saracen Cross during the first weekend in November, the highlight of which will probably be my return to the excellent Standard Inn.

Celino’s massive new opening in Partick has received lots of attention, an investment which is an enormous jump in capacity for the owners, coming from their far more modestly-sized outlet on Alexandria Parade. I’ve been in during daylight hours and am impressed with the interior, even though I would have preferred use of a darker wood tone. I particularly like the small coffee bar by the door, those couple of chairs surely the best seats in the house.

Their island bar is an attempt to create a destination drinking spot, something their rivals in the east, Coia’s, have never utilised. It will be interesting to see the interaction of a night-time between diners and drinkers. 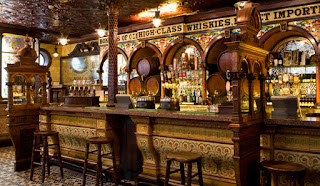 Moving away from Glasgow, next month I will be heading up the east coast for a long-overdue return to the watering holes of Aberdeen. The historic gems, the Grill and Cameron’s Inn (Ma’s) will surely be visited, along with the whisky and cigar emporium CASC.

Nearer in time, this weekend I will be returning to Northern Ireland after a visit only six weeks ago. On that occasion, I missed the opportunity of sampling the delights of a few gloriously intact listed interiors of pubs in County Tyrone. This time, that mistake will not be repeated when I land in Belfast.

Pubs on my list include Ronnie Drew’s, the Errigle Inn, and the Rock. And even though I’ve been many times, the most famous of all, the Crown Liquor Saloon will feature too. It promises to be a good weekend. Just goes to show, there is even some comfort in the future, no matter how fleeting.