The self-styled Brewdog craft beer revolution continues with their latest pub opening, this time in Glasgow. Aberdeen and Edinburgh were first – Newcastle, Camden and Manchester in the pipeline - and the word is they are pretty successful. But on this occasion a coup may be harder to come by, the location, opposite the Kelvingrove Art Galleries, being a troublesome one.

Different ventures have come and gone, many in double-quick time, over the last few years. I’ve even mentioned the phenomenon of under-performing venues in this area, which logically should attract punters by the thousand, in a previous blog. But, for whatever reason, at number 1319 Argyle Street, bars as diverse as The Calypso, Blas, Museo and The Lock Inn (among others) have all nose-dived.

After intense (oh yes) speculation amongst Glasgow’s devoted pub scene followers as to where Brewdog would site their first foray as publicans into Scotland’s biggest city, I, for one was surprised by this choice. But Brewdog know better, either that or their location scout has let them down.

A few months on from the July opening and business seems to be okay in craftbeerland, judging by the word on the street and my two visits – daytime and evening. Like the other two Scottish premises the look of the place is post-industrial, bare brick, girders, pipes, wipe- down tiled walls, reclaimed furniture and vast expanses of glass.

But for all the supposed practicality of the interior there is an impractical looking high storage area from which stock would be hard to retrieve. Large windows are all the rage, but this amount of glass with two single doors will probably mean a draughty, cold winter. Either that or massive amounts of the dreaded condensation. This kind of warehouse interior was cutting edge five years ago, now it is merely generic.

School-lab science stools add to the spartan feel. ‘Utilitarian’ the management call it. Now, I like a bit of utilitarianism in political theory - I’m more a John Stuart Mill man than for the zealot Jeremy Bentham - but the utilitarian goal applied to interior design is fine for offices, factories and other work spaces but not for places of leisure. In a bar you need comfort. From the furnishings as well as from the alcohol itself.

Talking about the alcohol, pride of range is of course Brewdog’s own home brew, so to speak. On draught they have Trashy Blonde, Zeitgeist, 5am Saint, Punk and Hardcore Ipas, Alice Porter Stout, and Imperial Wheat. Also they feature beers from affiliate or collaborative brewers who supposedly share BD’s tastes and ethos.

The Meantime Brewery, London, features with its London Stout. The innovative and prolific Danish brewers Mikkeller contribute their Texas Ranger, a Big Worse edition, and the confusingly named Black Hole White Wine. The San Diego-based Stone Brewing Co. are also included with their Arrogant Bastard Ale and the amusingly titled Sublimely Self-Righteous Ale. Every one with a high ABV.

During my first visit the barman was very helpful, with background on each beer and his own recommendations. And there’s plenty of literature on the brewing process, BD’s expansion plans, opportunities to buy BD equity and, more interestingly, tips on what food to pair with what beer. Good to see beer being elevated in the epicurean league to alongside wine.

There’s a very limited selection of wine and spirits which is unsurprising, but heed needs to be paid to the Glasgow practise of pairing a spirit with a beer, the traditional hauf and a hauf updated. The ultra strong beers have taken the place of malt whisky in the small treat, small measure department and for a beer showcase like this that’s fine, but perhaps more notable whisky should be on offer other than just a Auchentoshan single malt.

And food offerings should be broader than the presently offered burgers, mixed platters and pizzas. It kind of negates the afore-mentioned guide to beer and food. And they only seem able at the moment to serve two food orders at a time for whatever kitchen reasons. Not good for medium or large parties.

Is this Brewdog a place where groups would go for a whole riotous night, or for a couple blokes obsessed with real ale, sorry, craft beer, out for quiet drink comparing tasting notes? On the occasions I’ve been in, and looking at the promo photos, it seems the clientele is at least 70-30 male.

Yes, almost all pubs are mostly male, but for a joint with marketing and promotion aimed at the under 35 age group, this lack of women will eventually put off customers. Pub-goers like the flirting frisson. Without it the atmosphere lacks. And leaving aside gender, will students make up the pub’s customer base or the local professionals who frequent places like Firebird? If it is the student crowd they may eventually baulk at the premium prices and go to cheaper options west in Partick or east towards the city centre.

While some slivers of summer remaining the fixed bench outside is useful but apparently no drink is allowed outside. But at least you can admire – if you happen to be a marketing professional - the blue-gray livery of the exterior, the colour matching that used in other Brewdog promotional material, menus, magazines etc

“Beer for Punks” is the predominant Brewdog slogan in their alternative manifesto behind the craft beer revolution. But maybe that’s all it is, just an empty slogan. The BD boys, co-founders James Watt and Martin Dickie, constantly proclaim their difference from conglomerates like Anheuser-Busch Inbev and SABMiller but if you consider the aggressive marketing, rapid expansion, universal branding, and interiors more uniform even than Wetherspoons their baby is just a corporate embryo, differing from its bigger rivals only in size.

So not really a revolution at all. As someone once sang: ‘Meet the new boss / Same as the old boss.’
Posted by The Pledge at 18:03 0 comments 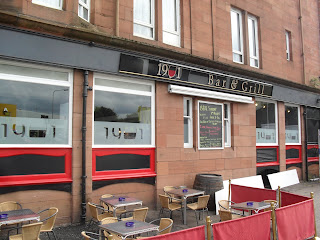 One of the challenges facing a bar investigator is to unravel the complex strands that constitute the pattern of pub ownership in Glasgow. Who owns where? who has shares in that place? which is a Free House, which is a tenancy, which is managed? Etc

Working in Nico’s, one of the early style bars, in the 90s, first alerted me to this opaque world. The main man there, who was also involved with the Cul De Sac in Ashton Lane, ran the show, paid the wages and marshalled staff and stock. But he didn’t own the joint, no. The mysterious guy who lived upstairs did, Walter. So I learned, eventually. If you asked questions, they asked you why. And I can’t even get close to remembering the obscurely named ‘leisure’ company that appeared on my pay cheques.

I won’t say that ownership can come and go depending on a good or bad night at the casino, as is the case with some Chinese restaurants, but you would never find out if it did.

Today’s pub scene, now dominated by the chain operators, differs from those simpler times, but it is no less labyrinthine. Take Graham Sutherland for example. He was employed as a consultant by pubcos such as Punch for a number of West of Scotland pubs, his family used to own the Drum & Monkey in the city centre, and he owns the Urban Pub Co, whose portfolio of leased pubs includes The Wise Monkey at Kelvinbridge and the south side’s 1901, both acquired last year. He also launched El Sabor, the tapas joint, and is now seeking investment to move back into Freehold pubs.

A busy man evidently, but maybe spreading himself too thin, if The Wise Monkey is anything to go by. I reviewed it last year and I wasn’t too impressed. Even now the signage is still temporary and the interior generic and uninspired.

The 1901 Bar & Grill could be different. On my first visit I was struck immediately by how established it looks, a total contrast with Wise Monkey. On a corner site on one of the south side’s main arteries, Pollokshaws Road, it is a rare licensed outpost in this relatively dry area. The Old Stag Inn is the only other pub nearby.

Ironically enough, the tenement in which 1901 resides (and has done for eleven decades now) was a fine example of the tenement builder’s art, called The Old Swan. The Art Nouveau interior was one of Glasgow’s best but is deceased. However the building lives on, like many other Glasgow tenements, after rehabilitation in the 70s. The original name for the pub was The Old Swan Inn, named not after the tenement but the old hostelry that had sat here in the days before trams and other mechanised transport. For all I know the Old Stag has similar antecedents.

The Old Swan pub was re-christened, firstly The Stout & Ferret, then the 1901, but despite the new-ish name the air of Edwardian stateliness remains. This gentility extends to the present interior of black, dark browns, cream and white, in which an umbrella holder, a proper wine rack and broadsheet newspapers laid out for customer perusal show a definite intention to create a substantial, almost elegant, presence.

The back bar area, has attractive little recesses, housing the till and other necessaries, this feature probably a longer fixture than the other Sutherland inspired improvements such as stripped back wooden floors and the division between the bar and the dining area. In some ways this partition is old-fashioned but it is a brave one. As was the decision to set a demarcation in food prices between the two areas, allowing customers to feel spoiled in the dining room, with a better, more expensive menu to fit special occasions.

The Chargrill menu is said to be a favourite and a concentration upon decent fare is continued in the bar, which has been awarded a Cask Marque. On my visit I noted Bitter & Twisted and the Timothy Taylor brewed Landlord. Prices are reasonable too, Belhaven Best, for example, at £2.60.

Even on the quiet afternoon I passed through, you could almost tell that the previous evening had been busy; it just gives off the air of somewhere maintained by regular custom. A popular local spot with a bit of class, further confirmed by the smart banquettes and the green, leather sofas in the overflow area.

After a pleasant service from an attractive young lady – no sniggering please – I moved to the enclosed outside area, a feature also instigated by Mr. Sutherland, to further enhance the feeling of quality. Decent barriers, and reasonably comfortable tables and chairs create a relaxing spot on this wide pavement, ideal to watch life pass by in this particular corner of Glasgow.

Only problem was that some tradesmen were putting up boards to extend the black signage round the whole exterior. And they were making quite a din with their exuberant sawing, without actually achieving too much.The signage lettering, though, is pleasingly retro, and the 0 in the 1901 appears as a glass half-full with red wine.

Suddenly their scaffolding was gone. Round the corner. I followed them to take some more photos for this very piece. But the two workies didn’t take too kindly to this attention, even though it was the building I was interested in. So I took my shots and was away pronto. Perhaps they thought I was a DSS snooper. Oh well, just another challenge that faces an intrepid bar reviewer.