A Light in the Far West 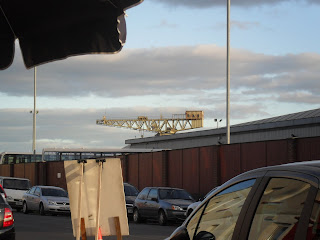 
As covered in one of my first reviews, last year, things have been looking up west of Partick. That early blog looked at Velvet Elvis, one part of Alan Mawn’s now three-pronged attack upon the Thornwood section of Dumbarton Road. The Criterion Café, his latest shoulder-to-shoulder outlet, is recently opened to much fanfare. I’ve been in a couple of times, as it seems has everyone else, but I’ll keep my opinions to myself for now, perhaps until it has settled down.

It’s further west I’m going, to beyond Whiteinch even. I know estate agents call it ‘the new West End’ out here but it remains an area short of destination eating or drinking joints. And South Street, the Clydeside short-cut that time forgot (ie no traffic lights) joining Partick with Yoker, is the last place in the vicinity you would expect to find a significant new-starter.

But there it is, La Bodega, amidst the tyre warehouses, scrap merchants, MOT garages, furniture showrooms and small workshops; what passes for industry in modern Glasgow. The only type of eatery that doesn’t look incongruous round here is an open-flapped snack bar, of which there are a couple.

It is worth remembering though, that without industry there would be no pubs or leisure. Think about it…So why shouldn’t a bar or restaurant sit happily alongside the sources of it and society’s wealth.

La Bodega occupies the bottom floor beneath a dance studio, Dance With Attitude. Upstairs you can learn a variety of dance including Salsa, and, ingeniously, you can try out these same moves down in La Bodega, after your din dins. I’ve seen it done. As the sun set over the Clyde, couples of all ages unashamedly moving onto the floor and strutting it before one and all.

That’s the kind of place this is, free and easy. Somewhere you can sit outside with a coffee and a cigarillo, stand at the bar with a frosted glass of draught San Miguel, or watch while hens order whatever cocktail they can think of, as they wait for their Hummer-limo to arrive.

Co-owner Alexia, originally from Gran Canaria, was trying to recall his club cocktail making days as he tried manfully to fulfil the girls’ orders of variations upon Pina Colada and Sex on the Beach, while experimenting with new combinations which he dispensed to other grateful customers.

And that’s another characteristic of La Bodega, ask for something, a particular drink or service – say an unusual aperitif, craft beer or extra large table for outside - and if it isn’t quite on their menu they’ll have it in next time, or do their best that night to satisfy your needs. Sometimes their efforts are a little amateurish but they do make a damn good stab at it.

The interior is a basic, ramshackle mixture of cheap flooring, real exposed brick, and hap-hazard carpentry – including a customised DJ booth and low stage – but none of this jars, because it complements the service, and more importantly, the distressed, dilapidated urban environment La Bodega inhabits.

The bar has been going now for around six months and this is the first time I’ve mentioned it, in contrast to other new joints. I can’t explain why, maybe I was too busy quietly popping down for pavement nightcaps; a novelty for my locale.

Despite my reticence La Bodega, along with Alan Mawn’s mini-empire further east, is spearheading the resurgence of this part of Clydeside. Previously lonely stretches of road have been brought to life, the transformation particularly obvious at night, when their lights provide a beacon for passers-by.

So, a note to local councillors and our legislators in general, hold back with your rules and restrictions, and observe the colour and community that good bars bring to our neighbourhoods.
Posted by The Pledge at 17:27 0 comments


In northern Europe a good test of a country inn is how much of a haven it becomes in harsh weather. A light in the distance beckoning the weary and battered traveller towards warmth, comfort and sustenance is the stuff of books and movies but it is more than fiction. Everyone has left the cold of the night or winter’s day to enter a warm, welcoming pub, and sighed with relief, looking forward to that imminent pint or bite.

We had need of such comfort on a day in the middle of last winter, the coldest in a generation. We had ventured north in search of some pretty, wintry views for The Muse’s photo album, duly obtaining plenty, the best probably being trees bowed over, overburdened with snow framing the road high above Glengarry. We could have then pressed on to the remote Cluanie Inn but the cold turned us around.

On the way back we called in at Laggan on the Caledonian Canal. The great pub, The Eagle Barge berthed there, was, unsurprisingly, closed for the winter, so I dipped into my list of country-pubs-not-yet-visited. There was one obvious place, but it meant a drive across the country- instead of southward- to the A9.

The Muse had been slightly reluctant going with this decision and I did start to think she may have been right as the going on the A86 got more and more remote and the temperature gauge dropped along with the remaining daylight.

Reaching the A9 itself was a bit of a relief as was the eventual signpost for Pitlochry. Now, I have ambiguous feelings for this town. It is tremendously located and I have enjoyed a great wedding reception in the Atholl Palace Hotel on the outskirts, but it, rather like Callander to the south -west, promises more than it delivers. Both towns have straight, dull main streets with uninteresting hostelries and a couple of grey, dour hotels which may have public bars but no-one with any sense would want to find out. They both also proclaim themselves as ‘The Gateway to the Highlands’. Lazy marketing.

But we were headed to Moulin, a village adjoining Pitlochry, reached turning east off the main street. As we pulled up to the Moulin Inn the temperature touched the high, minus-teens. A good time to stop.

The Moulin Hotel has been going for quite a time now, 1695 is claimed. It is the focal point of the village, which developed over the years into a staging post for horse-drawn trips both north and south, and for the railway.

The hotel part of the buildings looked nice but we ducked into the Moulin Pub, it being the object of the exercise. This pub has won numerous awards over recent years, including Scottish Pub of the Year in 2006, but my recommendation for the place came from climbing acquaintances. Some bearded some not.

Coming from these hardy outdoor folk, I knew the place would offer hearty food and have a fireplace. In fact, The Moulin has two fireplaces, the second of these dividing the room. The larger area is mainly kept for tables at which to enjoy said food, the other beside the bar itself is more for standing.

I’ve always preferred the upright areas in bars, so much easier to mingle, mutter and eavesdrop, but the interesting little nooks in the former area made me pause. The reaction one gets when stopping in the middle of a bar gives an indication of the place’s attitude. Here, there was indifference or casual acceptance of our presence, depending on my particular level of paranoia at that hour and that day. I can’t recall.

Anyway, we moved into the standing area, mainly for the extra heat we would receive from the proximity of warm, breathing bodies – despite the well-stacked nature of both fires they weren’t blazing quite strongly enough to stave off the freezing air plunging down the chimney.

We squeezed in behind a small table after the drinks were ordered. There were quite a few locals around us – you can tell by the way they stand, trust me – and a few interesting conversations on the go. One guy, was informing everyone who ventured within earshot of his long drive to London either late that night or early the next morning to get back to his “day job” that of a lawyer or other such moneyed profession. Seems he had a home in Moulin as well as The Metropolis and was “taken with the country way of life”. He also mentioned something about a commission he had received to make a light fitting out of deer antlers. Evidently a talented bloke.

Talking of deer, we had the obligatory venison stew while I admired the beams and panelling. They appeared to be original, or at least not replicas there to imitate the ancient and antique. I was right and wrong. They are actually from the old coach house, used in older times for the staging post purposes mentioned above. And the coach house now accommodates the Moulin Brewery- from which I enjoyed halves of Ale of Atholl and Braveheart beers. Every building in the little complex now seems to have been profitably utilised in a gradual refurbishment that began about 15 years back.

In the pub a couple of things detract. Behind the bar, there is rather cheap shelving which doesn’t fit with the rest of the interior. And they have done the bank-note-collection-thing, adorning the walls. Too many pubs have done this now, for it to have any decent effect.

We had finished our food and enjoyed another drink standing up, as it were. More locals had arrived now in the early evening and the chat was getting even better. A woman near us was talking to her female pal about a local gent she may have recently ‘partied’ with, as Americans say. The bloke in question was said to have “more wrinkles than inches,” which brought grins and laughter all around, from her neighbours and the rest of us.

I don’t know if she was referring to antler man but I do hope so. But it doesn’t really matter because the conversation sums up this place. No, I don’t mean it’s a den of sexual adventures and innuendo (it may be but I didn’t have the time to find out), but rather that it includes everyone in its welcome, from seasoned locals to passing strangers in out of the cold. This quality is rarer than you might imagine, so call in to The Moulin, whatever the weather.
Posted by The Pledge at 20:05 0 comments