Two Stirlingshire Inns - The Gargunnock Inn and The Drymen Inn 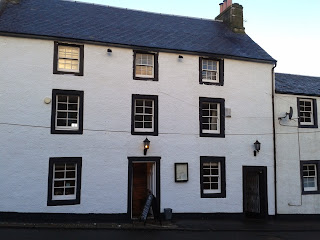 Mostly, it’s the biggest mouth that has the least to shout about. In these days of intense promotion, social media, multiple media platforms and barrels of bullshit this truth is easily overlooked.

The Drymen Inn in the village of the same name opened a couple of years ago with much noise. Marketing, some people call it. I call it waffle. But all new establishments believe they have to do it.

However, they should put the first things first, ie run a decent establishment with good booze and food, sympathetic service and high standards of cleanliness. Success flows, mostly, from these essentials not a clever social media strategy. 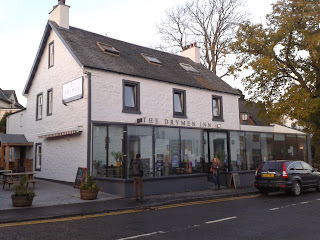 The large windows of the inn are the thing one notices initially. I sigh when I see them, because virtually every new pub or restaurant deploys them but most people are probably quite impressed by the huge expanse of glass so we can ignore my input as being unrepresentative.

What we couldn’t ignore was the state of the glass when the Muse and I last visited and sat in the conservatory section. Noticeably smeared and streaky. You can forgive condensation because that can appear despite your best efforts but the mess here was down to a basic lack of care. And the adage of a joint only being as good as its worst cleaner was proven.

And, sadly, this neglect continued on the tables and the floor, with crumbs everywhere, accompanied by dirt and, presumably, animal hairs. We had planned to order food but after seeing this mess we limited ourselves to drink.

This slovenliness is disappointing because it detracts from the eclectic interior that has various sections of interest including a wood burning stove and stone pillaring. It manages to achieve that sought-after amalgamation of contemporary and rural with a fair degree of style. Even if there is a slight flaw in layout with far too much room behind the bar itself. Maximise punter space, designers! 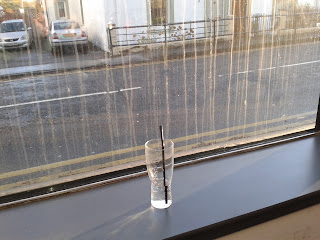 So, despite the bad start to our visit we gave the Drymen Inn a second chance. Because of the decent interior, the attractive outdoor furniture and…well, that’s the kind of people we are – exacting but fair.

But, eventually, we couldn’t ignore other faults that appeared. The service was friendly enough but disinterested. As if they weren’t really bothered if we were there by the window or not. Even when I came to settle our bill.

At least we had each other to talk to but the single man sitting at the bar could have done with some chat but the two bar persons were too busy talking to each other and then with a couple of other off-duty colleagues who appeared halfway through the afternoon.

And while I waited to pay I noticed the large glass gantry of their premium drinks. Not appropriate, I feel, for a rural setting and it hints too loudly at profit margins.

We left a little deflated. A joint not living up to its billing as the flagship pub/restaurant in a village dear to us – we exchanged our vows only two hundred yards down the road. 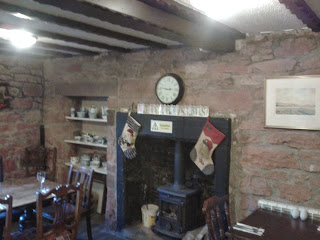 A village we know less well, just ten miles to the east is Gargunnock. Its eponymous inn has been operating for hundreds of years, its profile reflecting the modest size of the local population and the village’s fair distance from Glasgow.

It is far nearer to Stirling. The main road to that city, the Gargunnock Straights, was known for being the proving ground of boy racers as they displayed their bravado by nudging speedometers higher and higher. Perhaps they still do.

If you enter from Main Street this is the original inn, part of a row of whitewashed buildings dating from the 1600s. The pub/restaurant of today has extended back to more than double the original space creating a long, thin layout.

This interior has no less than four different sections, all interesting. The front (if it is the front) is two old rooms with a real fire. Sitting here you can easily imagine the centuries rewinding - you’ve just arrived after a long coach trip or handed your horse over to the groom to take it to the stables, while you warm yourself and look forward to a hearty stew and a warm(ish) bed. Serving wenches are optional. 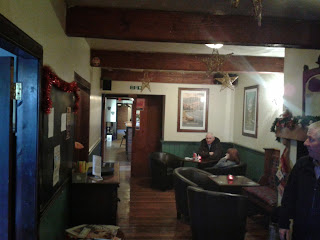 Further in is the first bar area complete with dining tables. Here they serve good food, simple pub grub but done very competently. The kitchen hatch is on one wall for those of you who like to feel close to the chefs while they work.

The third area is a hall with another fire and comfortable seating and off this is the public bar, which includes another bar counter, jukebox, and pool table. Perfect for a more relaxed afternoon or evening drinking a session lager or 13. While the hall is more the place for after-lunch/dinner coffees and the newspapers.

Beyond the hall is the back door leading to the sizeable car park. When you look at the inn from there it appears to be the front, perhaps being the entrance that most locals use? And they do use this place very regularly. As they should. It deserves their custom and that’s the best you can say about a pub.

The present owners, the Bedwells, have continued the good work of their predecessors maintaining a place that gives credit to its village, and I’m sure that won’t change, no matter how loudly they shout.