Wintersgill's - No One Will Suspect 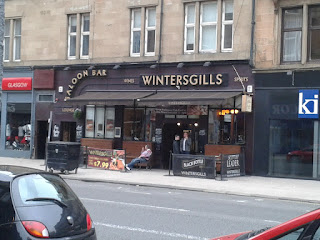 
Many Glasgow bars operate under the radar. Wintersgill’s is one. Sitting on the quietest stretch of Great Western Road, near St George’s Cross, for a few decades does that to a bar and means it doesn’t feel the need to shout about itself.

The name has an old-fashioned ring to it but is not the original. That was Andros, back in the 70s, and at that time it was a fashionable hang-out under the celebrated ownership of the Dows. A place where champagne glasses were assembled into that fountain effect we’ve all seen in the movies but probably never in real life.

Since then a more modest existence, apart from being an unofficial Partick Thistle fan meeting point. Most people will pass by thinking it’s just a local for aging, hardened imbibers and leave it to the regulars. This is a view of the place that suits some who have used it, as I will explain.

Picture an evening a few years ago. I had visited ‘Gill’s a few times as I worked nearby, so chose it as the starting point for a Friday night. I even phoned ahead and booked a meal in the side bar. Judging from the reaction over the phone this was unusual. But in there I sat – now there is a posher back area for food – until I tired of the solitude and took my plate next doors into the busy public bar.

The stately brown banquettes that make up most of the seating were half-full and eager eyes followed my dinner to its seat. To discourage them I ate quickly, before starting to admire the large interior. It is surprisingly elegant, with fittings that have a pleasing permanence. Elaborate cornicing, cream pillars, globe lamps and shapely panelling all impress.

Pleasing to look at and also functional. Space to move around in and an environment to make you linger. Details such as the facing of the bar counter sloping away from your legs to give you extra room – pointed out to me by Borrochneldia – were missed by me at the time, but I did appreciate the overall ambience. It was going to be a good night, I felt, both here and in later venues.

Most of the rest of the people seemed to share my optimism but two young blokes near me did not. They looked uptight, on edge, uncomfortable. The smaller of the two was doing the only talking. And patting his mate on the arm every so often. None of it got any reaction.

I gravitate towards tension, so once I’d finished my dinner, I edged into a seat nearer the two. There was still little chat and the mood unchanged. I went for pee, down the enclosed narrow stairs.

I was mid-stream when other people entered the toilet. A quick glance over my shoulder revealed it was the nervy blokes. I turned away again quickly. I could then sense a pause, before there was the sound of a door closing. Aye, aye, I said – inwardly.

Washing my hands I noticed the cubicle door didn’t seem to have a proper snib on it. I took a step closer.

Their voices were clear. “What’s the problem?” said the smaller guy – his volume was in inverse proportion to his size.
“Nothing,” said his pal.
“Aye there is, I can tell. Look, shut up” (superfluous comment surely) “ and keep your back to that door.”

Then came some tap, tapping, and scraping on porcelain. I was about to leave them to it when out came the immortal line, again from the wee man: “This is an old man’s bar, no one will ever suspect.”

I chuckled going back up the stairs but never quite realised I would be using that line some years in the future in a wildly successful blog.

Anyway, they returned soon after me and soon began to be a lot freer in their conversation. Passing by their table a number of times I heard phrases like “big consignment coming in” and “the Gleneagles deal”.

Now this was before the G8 summit and the successful Ryder Cup bid but even then the hotel carried a luxurious reputation, so I was sceptical about what I’d heard, thinking that the closest these guys would get to Gleneagles and cash negotiations was the bookies on Auchterarder High Street.

My horse didn’t come in either because my pal called to cancel and so I had to head-off to pursue my chemical highs (CH3-CH2-OH) alone.

Nowadays Wintersgill’s boasts some natty wicker outside-furniture and a slightly more sophisticated air than before. Go there and enjoy yourself.

Note: Author cannot accept any responsibility for any trouble you get yourself in through your drug of choice. Though, if reports on a certain type’s purity these days are true, you will get a better hit with a couple of quick, strong cups of black followed by a brandy chaser.