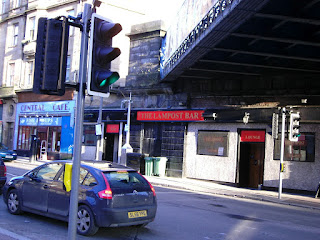 It was a commentator on the legacy of the Pilgrim Fathers who once described myth as being the best part of the truth. They weren’t the first settlers nor the most powerful but the American people have, democratically, chosen them as their founding myth, their fathers.

I’ve got many, what you might call, myths about pubs running around my head, sometimes too many to get a decent night’s sleep. Some are actually dreams, some events actually happened to me but with time passing their shape changes until I can’t remember what was reality and what fancy.

The Lampost has appeared in a number of them. This pub of some repute on Duke Street was, according to my mind, memory or imagination, one of Glasgow’s roughest shops. So rough it didn’t even have a proper bar counter, just a hatch. I think I had been in once on a crawl with some Strathclyde Uni denizens but for obvious reasons recollections were hazy. So hazy that I have never been since sure whether I was mixing it up with one of the pubs further east near the disused meat market in Bellgrove.

But I knew that one of the features of The Lampost was such a lighting fixture inside the pub itself, taking eponymous to new lengths. Presumably the light only appeared after the bar changed name from the previous Uneeda Bar.

A little while ago it unfortunately closed, experiencing a fate common to many previously thriving bars. Its regulars moved to the Old College Bar (Glasgow’s real oldest bar) but it seemed to be the end for The Lampost.

Until late last year when fellow blogger Borrachoeneldia, informed me that it was to resurrect (its name at least) on Saltmarket. And, he told me, the actual lampost was moving too. The new home was to be premises formerly known as O’Brien’s a name I remembered instantly.

This had been a nasty little joint and the scene of my drugging one memorable (or not) night. Unlikely as it sounds, my lager was tampered with, probably by a couple of shady blokes who were perhaps targeting The Muse.

Whoever was the intended recipient I spent a lost 30 minutes in the loo and emerged with the intention of getting home as quickly as possible, certainly unlike me, m’lud. And there’s more evidence. Even out into the promising fresh air of a late Glasgow evening I didn’t change my mind, I got into the first taxi to appear and headed home. And in the morning, zero hangover, so the drink wasn’t to blame.

But despite this history it didn’t put me off returning. One recent midweek afternoon, Borrachoeneldia and I visited it, along with a few other nearby hostelries, including The Crystal Bell, The Spirit, and The Old Empire. The Lampost was halfway through the crawl.

Two different entrances to the two halves of the bar, form what appears to be a rough V shape. This shape is maybe dictated by its location under the arch of the disused railway bridge above, the same line under which The Empire, The Spirit and Mackinnons all lie.

But the previous interior had been long, thin and only one bar area. Or is this recollection clouded by the substances fed me that night? Anyway, now there’s two sections to it, public and lounge. The refurb has a very flimsy look to it, on a plywood level. No original features seem to have been kept and the avocado colour deployed predominantly does very little to dissipate the coldness of the place.

Hollywood pics and prints feature everywhere and just when you think the look couldn’t get even more generic you will spot one of the NY skyline. All very disappointing and the cut-price nature of the work is confirmed in the poorly-appointed toilets. No dryer, just a humble hand towel dispenser, complete with an unopened salt sachet sitting on top when I visited.

But you don’t expect luxury around here but maybe some wit. I got some of that when I ordered another thing you do expect, cheap beer. Tennents Light - aka 60 shilling – for £1 a pint. A guy at my elbow started laughing, calling my choice “nothing but watered-down Coke!”

There are times when I would have taken offence but here wasn’t one of them, because I didn’t care, the budget was tight and this discount would mean an additional drink. So I just grinned.

Borrachoeneldia and I eventually dragged ourselves away from the repartee to take a closer look at the lounge. It was even colder in there. But there was something warming-up. A singer actually. Waited for patiently and silently by three earnest-looking middle-aged couples.

The crooner was one of a number of entertainers who circulate to cover the afternoons at the pubs round here, the afore-mentioned Empire and Spirit included. They take turns to fill the slots keeping the punters happy all through daylight.

And his chat was better than the guy at the bar. When one of the ladies asked him to turn-off his little spotlight he responded by asking; “sorry, does it remind you too much of Cornton Vale?”

We left soon afterwards to continue our tour of the pubs and the poor photo you see above was meant to have featured the famous LAMPOST but it is only some sort of electronic mast. The real thing was inside beside the singer’s equipment Borrachoeneldia informed me too late.

Sometimes I think I’m in the wrong business when my powers of observation let me down so badly, not to mention my memory.

But my imagination, I think, remains in pristine nick. There are no myths yet about the new Lampost but give me time.
Posted by The Pledge at 22:35