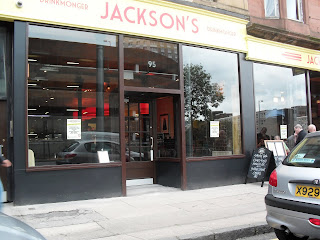 But I am thinking about names that irritate the powers that be, or the people that tut-tut at anything they don’t deem healthy. “Drinkmonger” sounds just like the kind of badge those folk would stick on to publicans, in a similar way to how they would apply other labels of notoriety like “drug peddler!” or “womaniser!” or even “loan shark!”

It takes what the Americans call big ‘cajones’ to name your new place this, either that or blissful ignorance. Whether Walter Smith and his business partner, Paul Burns, in Pub Enterprises Co. possess the former is unknown, but I’m reminded that Mr Smith never did like bad publicity in his more famous occupation as manager of Glasgow Rangers FC.

Its other name is Jackson’s Doghouse, a reminder of an old pub that used to sit on Dundas Street and reputed for its stylish interior including mock dungeon!

Jackson’s used to be Mackintosh’s. A wee place I liked, as you can tell from the tone of my blog from last year. A mock-Tudor curio really but healthy for it, and a good spot of welcome for local imbibers, many of them regulars for countless years.

The main difference from before is the visibility factor. Mackintosh’s had small, stained-glass windows, whereas Jackson’s has huge ones, windows that is (see above).

This is the vogue right now. Transparency. Apparently. People are no longer ashamed of being seen in a pub, as they are reputed to have been in the past. But the allure and the mystery are lost with these huge panes. The place is disrobed before one even enters its chamber.

The interior also follows present mores with a quasi-industrial look, metal ceiling struts that have no function, exposed bits here and there, a look I’ve seen everywhere recently, from Epicures in Hyndland to Brewdog. But they have exposed back far enough to uncover the original ceiling (thanks Borrachneilda for first noticing this), the ceilings in Mackintosh’s presumably having been false.

Another wee thread is the juxtaposition of the old and the new. So the stained-glass partitions remain and a Benny Lynch tribute-night poster and the grey pillars (although they are probably a structural necessity). Beside all that are the new couchettes and stools, and chic transparent chairs. Flock wallpaper and fish tank (a la Variety Bar, Berkeley Suite) also.

And the clientele mix reflects this too. Faces from before are here and there, alongside newcomers. Couples in attracted by the food, mostly served in the left half of the place, a phenomenon not really seen in here before, neither the menu boards on the pavement.

Attracting probably two different types of punters side by side. Just as the two TV screens were showing the football alongside Sky News one of the occasions I popped in on a Saturday afternoon. Two different types of visitors catered for at once. And again with the line-up of traditional brand optic spirits behind, just as traditional, long counters, while a suspended blackboard lists wine recommendations.

One slightly strange thing that seems outwith planned themes or conscious selling points are the toilets. These have a false ceiling and are tiny. Everything, urinals, basins, dryers even, scaled down. And the cubicle, in the Gents at least, is long and thin. So long that it reminded me slightly of the cubicles in the Dragon I uber-style bar in Hong Kong, minus the mirrors, personal washbasins, fancy lighting and sparkly tiling.

Returning from the conveniences, as we all must eventually, I felt that Jackson’s hasn’t yet established its own style. Everything is a little too planned, demographically and in fashion terms. And it has no real controversy either, nothing to get passionate about either way. Maybe the only thing that is risky or edgy in here is the name. And that’s not enough.
Posted by The Pledge at 15:24