Return of the Snobs 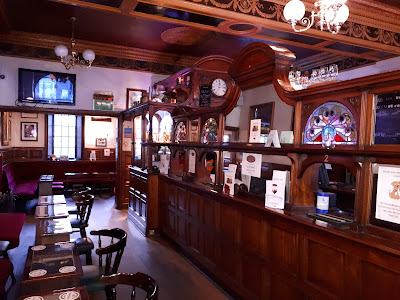 A couple entered the pub. A man and a woman both in their mid-30s. Trendily dressed, stylish, even elegant. Masked, they approached the counter. The man did the ordering and paying without removing his face covering. Drinks in hand, they moved through the front saloon without pausing to look for standing room or even a couple of chairs; their destination the three or four sitting rooms/snugs at the rear.

I observed this occurrence, standing at the bar in the estimable Bull Inn in Paisley, only a few days ago. Hardly worthy of note, one might say, but it is perhaps an example of the new way of things in and around pubs across this island and the wider world. There would be seats in the sitting rooms for the couple to ease the weight on their feet, but I sensed they wanted something else, too: to be separate from the relative busyness of the main bar area, not have to mingle with us populating the public/saloon bar.

Everyone, of course, is entitled to do their own thing, sit or stand where they want, talk to who they wish but commentators are also free to draw attention to behaviours indicative of general trends, and the trend here is of the bourgeoise sipping their drinks, always seated, in the comfortable back rooms while the plebs drain their pints on their feet at the bar. Each to their own, as I said, but it is a fact that the former, have sought to prohibit the latter exercising their own particular way of life and way of drinking over the past year and a half and into the grim future.

The title photo of this blog shows the “snob screens” of Leslie’s Bar in Edinburgh’s southside (an even more magnificent pub than the Bull Inn). These features of late-Victorian/Edwardian pubs allowed the better-off, the bosses, the professional classes, to partake of drink hidden from their social inferiors. In essence, to indulge in pleasure without having to admit such pleasure.

Today’s new “snobs” would laugh at such artifacts of less enlightened times, and be shocked if their conduct was regarded as similar. After all, they would say, “We are progressives, we believe in inclusivity, diversity, community, society.” But are they, in fact, practising the modern equivalent? As always, it is wise to pay attention to people’s actions, not their words.

Confined to the snugs and private areas of a selection of traditional pubs, this resurgence of segregation and associated attitudes could be written off as just an interesting side-note, but it is not just emerging in hostelries’ internal architecture, rather, whole bars are changing their operating methods, and limiting access. 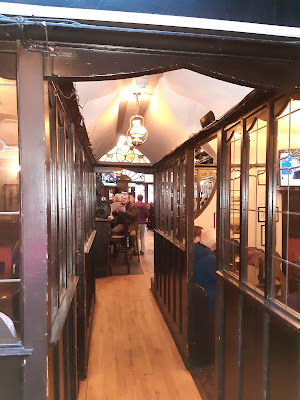 The view from the back of The Bull

The same weekend as my enjoyable visit to the Bull Inn, a pal and I were on more familiar territory, along the Gallowgate. After a first drink in 226 Gallowgate for many a long month, we crossed the road to The Gate. At the end of its close entrance, a red velvet rope barred our way. As I attempted to unfasten the rope, a staff member hurried over at a speed only suggestive of some bonus exclusively reserved for the knocking back of customers. He asked if we had a table booking. With barely a word, we shook our heads and left. A few yards further east sits Van Winkle. Here we managed to reach the actual bar within the joint. But as we got ready to order our drinks, an employee enquired if he could help. Our simple reply that we would like a drink had him a bit flummoxed. After a pause, he stated he would see if he could find us a table. After an achingly slow 60 seconds, we saved him the trouble.

In order to retrieve some sanity, we crossed the road to The Cabin (only recently reopened) and had a Guinness and a chat with proprietor Donna. In order not to spoil the mood, I didn’t mention our recent experiences the other side of the Gallowgate.

Now, I have nothing against cocktail bars; bars that operate, primarily, around table service. Nothing at all, I’ve drunk in many of them. But the best of them emerge organically, not through a desire to be painfully on-message with public health diktats. And they will find you a seat or allow you to stand near the bar, the only exception; you are an obvious reprobate.

But these two establishments, and others, were previously thriving bars offering a mix of standing and seating. However, despite a seeming return to normality, they have chosen to enthusiastically embrace the ‘new-normal’, and stand ready to eagerly follow each and every restriction imposed on them by their government, just to appear right-on, virtuous.

Only a few weeks earlier, in The Finnieston, (one of my previously favourite bars of the last decade) the Muse and I were seated at the bar late on a Saturday evening. We had taken the chairs only because they were vacant, comfort our only motivation. It soon became apparent, as other people attempted to approach the bar, that standing was no longer tolerated. The manager, just like the staff in The Gate and Van Winkle, was extremely keen to enforce this rule, informing every entrant that there were no seats left, sending at least 20 people back out into the rain.

As we sat drinking our next and final round, I asked the guy why they had adopted this policy. He immediately mentioned Covid, under the impression that this would end the discussion. But those Covid regulations are gone, was my reply. After a few management-speak banalities, he seemed exasperated I wasn’t buying his line. His last attempt was that we had the best of it, comfortably seated, able to order without the hassle of crowds. I nodded – “But if we had been three minutes later, we’d be outside with the rest of those unfortunates you have dispatched.”

I forget his exact response, but that and their reasons for imposing table-only are immaterial, the damage is done, will be done. Pubs and clubs are one of the few remaining places in modern life for people to meet and talk to folk outside of their immediate circle of friends and family, eclectic melting pots of discourse and fraternity. Table-only establishments allow none of this. For a society already profoundly atomised, we can ill afford the demise of any such meeting place. The resultant fractures will lead to consequences that may even affect the new snobs, wherever they’re seated.

Email ThisBlogThis!Share to TwitterShare to FacebookShare to Pinterest
Labels: The Bull, The Finnieston, The Gate, Van Winkle